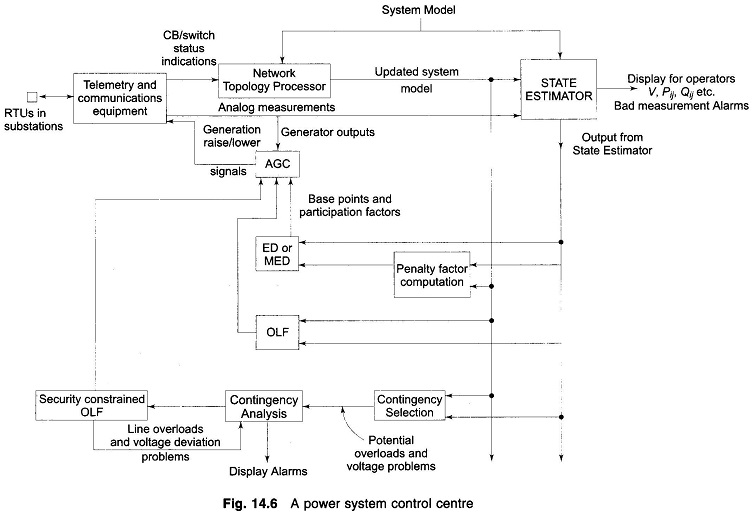 Figure 14.6 is a schematic diagram showing the information flow between the various functions to be performed in an operations control centre computer system. The system gets information from remote terminal unit (RTU) that encode measurement trunsducer outputs and opened/closed status information into digital signals which are sent to the operation centre over communications circuits. Control centre can also transmit commands such as raise/lower to generators and open/close to circuit breakers and switches. The analog measurements of generator output would be directly used by the AGC program. However, rest of the data will be processed by the state estimator before being used for other functions such as OLF (Optimal Load Flow) etc.

Before running the SE, we must know how the transmission lines are connected to the load and generator buses i.e. network topology. This keeps on changing and hence the current telemetered breaker/switch status must be used to restructure the electrical system model. This is called the network topology program or system status processor or network configurator.

The weighted least-squares approach to problems of static state estimation in power systems was introduced by Schweppe [1969-74]. It was earlier originated in the aerospace industry. Since 1970s, state estimators have been installed on a regular basis in new energy (power system or load dispatch) control centres and have proved quite helpful. Reviews of the state of the art in state estimation algorithms based on this modelling approach were published by Bose and Clements and Wu. Reviews of external system modelling. A generalised state estimator with integrated state, stutus and parameter estimation capabilities has recently been proposed by Alsac et al. The new role of Application of State Estimation in Power System and other advanced analytical functions in competitive energy markets. A comprehensive bibliography on SE from 1968-89.