Having acquired a target through a scanning method as just described, it may then be necessary to locate it very accurately, perhaps in order to bring weapons to bear upon it. Having an antenna with a narrow, pencil-shaped beam helps in this regard, but the accuracy of even this type of Antenna Tracking System is generally insufficient in itself. An error of only 1° seems slight, until one realises that a weapon so aimed would miss a nearby target, only 10 km away, by 175 m, (i.e., completely!). Auxiliary methods of tracking or precise location must be employed. The simplest of these is the lobe-Switching Technique illustrated in Figure 16-7a, which is also called Sequential Lobing. The direction of the antenna beam is rapidly switched between two positions in this system, as shown, so that the strength of the echo from the target will fluctuate at the switching rate, unless the target is exactly midway between the two directions. In this case, the echo strength will be the same for both antenna positions, and the target will have been tracked with much greater accuracy than would be achieved by merely pointing the antenna at it.

Conical Scanning is a logical extension of lobe switching and is shown in Figure 16-7b. It is achieved by mounting the parabolic antenna slightly off center and then rotating it about the axis of the parabola, the rotation is slow compared to the PRF. The name conical scan is derived from the surface described in space by the pencil radiation pattern of the Antenna Tracking System, as the tip of the pattern moves in a circle. The same argument applies with regard to target positioning as for sequential lobing, except that the conical scanning system is just as accurate in elevation as in azimuth, whereas sequential lobing is accurate in one plane only.

There are two disadvantages of the use of either sequential lobing or conical scanning. The first and most obvious is that the motion of the Antenna Tracking System is now more complex, and additional servomechanisms are required. The second drawback is due to the fact that more than one returned pulse is required to locate a target accurately (a minimum of four are required with conical scan, one for each extreme displacement of the antenna). The difficulty here is that if the target cross section is changing, because of its change in attitude or for other reasons, the echo power will be changing also. Hence the effect of conical scanning (or sequential lobing, for that matter) will be largely nullified. From this point of view, the ideal system would be one in which all the information obtained by conical scanning could be achieved with just one pulse. Such a system fortunately exists and is called Monopulse. 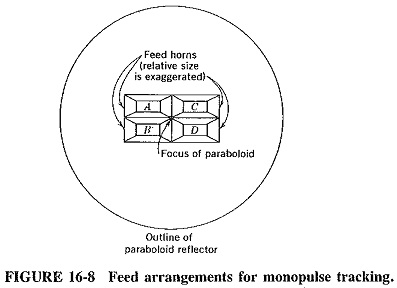 In an amplitude-comparison monopulse system, four feeds are used with the one paraboloid reflector. A system using four horn antennas displaced about the central focus of the reflector is shown in Figure 16-8. The transmitter feeds the horns simultaneously, so that a sum signal is transmitted which is little different from the usual pulse transmitted by a single horn. In reception, a duplexer using a rat race, is employed to provide the following three signals: the sum A + B + C + D, the vertical difference (A + C) – (B + D) and the horizontal difference (A + B) – (C + D).

Each of the four feeds produces a slightly different beam from the one reflector, so that in transmission four individual beams “stab out” into space, being centered on the direction a beam would have had from a single feed placed at the focus of the reflector. As in conical scanning and sequential lobing, no differences will be recorded if the target is precisely in the axial direction of the Antenna Tracking System. However, once the target has been acquired, any deviation from the central position will be shown by the presence of a vertical difference signal, a horizontal difference signal, or both. The receiver has three separate input channels (one for each of the three signals) consisting of three mixers with a common local oscillator, three IF amplifiers and three detectors. The output of the sum channel is used to provide the data generally obtained from a radar receiver, while each of the difference or error signals feeds a servo-amplifier and motor, driving the antenna so as to keep it pointed exactly at the target. Once this has been done, the output of the sum channel can be used for the automatic control of gunnery if that is the function of the radar.

The advantage of monopulse, as previously mentioned, is that it obtains with one pulse the information which required several pulses in conical scanning. Mono-pulse is not subject to errors due to the variation in target cross section. It requires two extra receiving channels and a more complex duplexer and feeding arrangement and will be bulkier and more expensive.

Some Antenna Tracking System are required to provide a certain amount of tracking but are themselves too bulky to move, e.g., the 120-by-50-m BMEWS antennas at Thule, Greenland. The feed is scanned on either side of the focus of the reflector. In simple systems, the feed horn may actually move, but in others a multiple-feed arrangement is used. This is rather similar to the monopulse feed but contains far more horns, and the signal is then applied to each horn in turn (also referred to as the “organ-pipe” scanner). An alternative to this system, which is rather similar to an interferometer, consists of using a number of fairly closely spaced fixed antennas and varying the direction of the scanning beam by changing the relative phase of the signals fed to the various Antenna Tracking System. The name given to this is Phased Array. Note that no antenna movement is required for scanning with either the phased array or the organ-pipe scanner.