As we know that ordinary transistor and tube RF amplifiers eventually fail at microwave frequencies, because of greatly increased noise, compared with their low-frequency performance. Unless a receiver is to be very low-noise and extremely sensitive (in which case special RF amplifiers will be used, then a mixer is the first stage encountered by the incoming signal in such a receiver. Silicon point-contact diodes (called “crystal diodes”) have been used as mixers since before World War II, because of their relatively low noise figures at microwave frequencies (not in excess of 6 dB at 10 GHz). Schottky barrier diodes have more recently been employed as microwave Waveguide Mixers and Detectors. They have similar applications but even lower noise figures (below 4 dB at 10 GHz). These diodes will now be described briefly. However, what is of greater significance here is how Waveguide Mixers and Detectors diodes are mounted and used in waveguides, and the rest of this section will be devoted to that subject.

The construction of a typical point-contact silicon diode is shown in Figure 10-44 an identical construction would be used for other semiconductor materials. It consists of a (usually) brass base on which a small pellet of silicon, germanium, gallium arsenide or indium phosphide is mounted. A fine gold-plated tungsten wire, with a diameter of 80 to 400 gm and a sharp point, makes contact with the polished top of the semiconductor pellet and is pressed down on it slightly for spring contact. This “cat’s whisker,” as it is known, is connected to the top brass contact, which is the cathode of the device. The semiconductor and the cat’s whisker are surrounded by wax to exclude moisture and are located in a metal-ceramic housing, as shown in Figure 10-44. 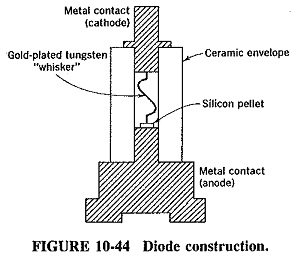 Such diodes can be fitted into coaxial or waveguide mounts and are available at frequencies in excess of 100 GHz, although they are then noisier than at X band. As already mentioned, they are used as microwave Waveguide Mixers and Detectors, there being some differences in diode characteristics between the two applications.

A diode must be mounted so that it provides a complete dc path for rectification, without unduly upsetting the RF field in the waveguide. That is, the mount must not constitute a mismatch which causes a high SWR. For example, the diode cannot be connected across the open end of a waveguide, or a mismatch will exist because of reflections. The diode must be connected across the waveguide for RF but not for dc (nor the IF, as the case may be). Any reflections from it must be canceled. This suggests mounting the diode λp/4 from the short-circuited end of a guide and attaching it to the bottom wall of the waveguide via a half-wave choke rather than directly. This will provide an RF connection but a dc open circuit, as required. Such an arrangement is indicated in cross section in Figure 10-45a, and 10-45b shows a more practical arrangement. Here a tuning plunger is used, instead of relying on a fixed wall λp/4 away to prevent mismatch broadband operation is thus ensured. Other versions of this arrangement also exist, in which the diode is connected across the waveguide by means other than the half-wave choke. Tuning screws are also often provided on the RF input side of the diode for further matching, as shown here. 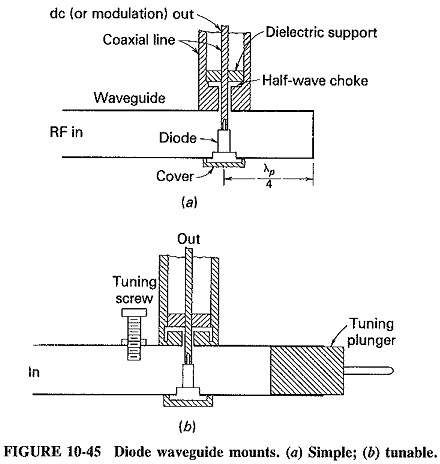 It is sometimes important to apply automatic frequency control to the local oscillator in a microwave receiver, particularly in radar receivers. Under these circumstances, a separate AFC diode is preferred. The result is a balanced mixer, one form of which uses a magic; tee junction to ensure that both diodes are coupled to the RF and local oscillator signals, but that the two signals are isolated from each other. A balanced mixer such as this is shown in Figure 10-47. 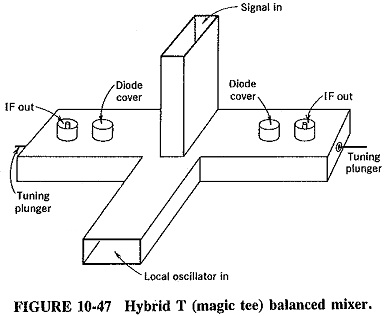