Steam turbines are one of the most versatile and oldest prime movers that transform the potential energy of the steam into kinetic energy and later in turn transformed into mechanical energy – rotation of turbine shaft.

Steam turbine can be classified

An impulse turbine has fixed nozzles that orient the steam flow into high speed jets due to the expansion of steam in the nozzles. These high speed jet contains significant kinetic energy which is converted into shaft rotation by the moving blades, as the steam jet changes direction. There is a pressure drop at the fixed blades, with net increase in the steam velocity across the stage. The steam leaving the moving blades has maximum velocity. The loss of energy due to this higher exit velocity is called the carry over velocity or leaving loss.

This can be better understood by passing a velocity diagram. 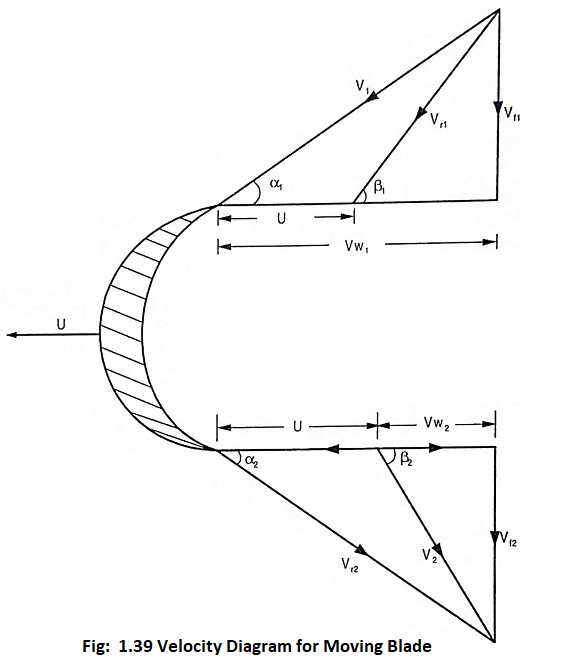 U = Linear velocity of moving blade

Vf1 = Velocity of flow at entry of moving blade

Vf2 = Velocity of flow at exit and moving blade

Vr1 and Vr2 = Relative velocity at entry and exit

α1 = angle with the tangent of the wheel at which the steam enters, also called nozzle angle.

α2 = angle which the discharging steam makes with the tangent of the wheel at the exit.

In order to have simplicity while solving problem, it is an usual practice to combine the two vector diagram as shown in Fig. 1.40. The diagram has been obtained by superimposing the inlet velocity diagram on the outlet diagram in order to coincide the blade velocity U. 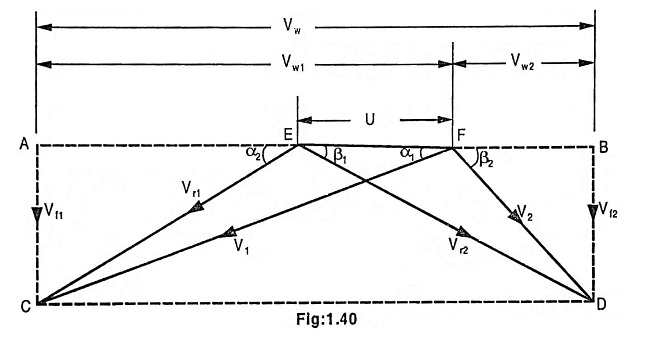 The work done on the blade may be found out by the law of change of momentum of the steam jet during its flow over the blade.

Vw2 is actually negative as the steam is discharged in the opposite direction to blade motion, therefore consideration should be given to the fact that the values of Vw1 and Vw2 are to be added while solving the problems:

The reaction turbine is turned by reactive force rather than a jerk or impulse in case of impulse turbine. In reaction turbine, there are no nozzles, instead, the blades that project radially from the periphery of the rotor are formed and mounted so that the space between the blades have a shape like nozzle. This blades are mounted on the revolving rotor therefore they are called moving blades. 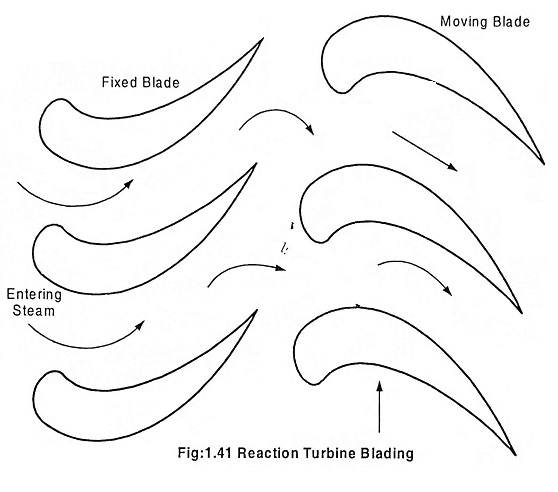 A reaction turbine is moved by three forces

In reaction turbine blades, the steam continuously expands at it flows over the blades. The effect of the continuous expansion of steam during the flow over the blade is to increase the relative velocity of steam. 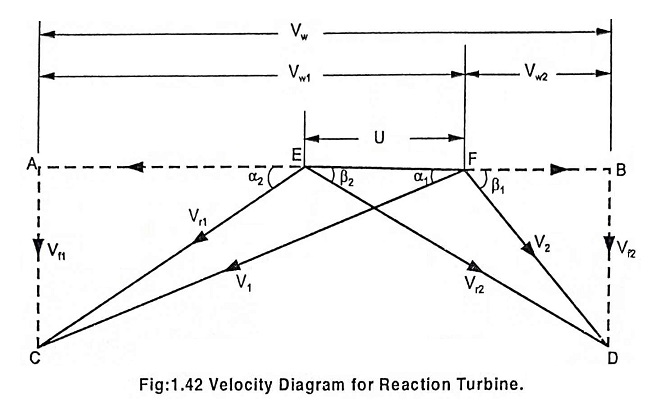 It is given by the ratio of heat drop over moving blades to the total heat drop in the stage.

the moving blade and fixed blade must have the same shape(symmetrical shape)if the degree of reaction in 50%. This type of turbine is also known as Parson’s reaction turbine.