Power Systems Growth – India is fairly rich in natural resources like coal and lignite; while some oil reserves have been discovered so far, intense exploration is being undertaken in various regions of the country. India has immense water power resources also of which only around 25% have so far been utilised, i.e., only 25000 MW has so far been commissioned up to the end of 9th plan.

As per a recent report of the CEA (Central Electricity Authority), the total potential of hydro power is 84,040 MW at 60% load factor. As regards nuclear power, India is deficient in uranium, but has rich deposits of thorium which can be utilised at a future date in fast breeder reactors. Since independence, the country has made tremendous progress in the development of electric energy and today it has the largest system among the developing countries.

When India attained independence, the installed capacity was as low as 1400 MW in the early stages of the growth of power system, the major portion of generation was through thermal stations, but due to economical reasons, hydro development received attention in areas like Kerala, Tamil Nadu, Uttar Pradesh and Punjab. In the beginning of the First Five Year Plan (1951-56), the total installed capacity was around 2300 MW (560 MW hydro, 1004 MW thermal, 149 MW through oil stations and 587 MW through non-utilities). For transporting this power to the load centres, transmission lines of up to 110 kV voltage level were constructed. 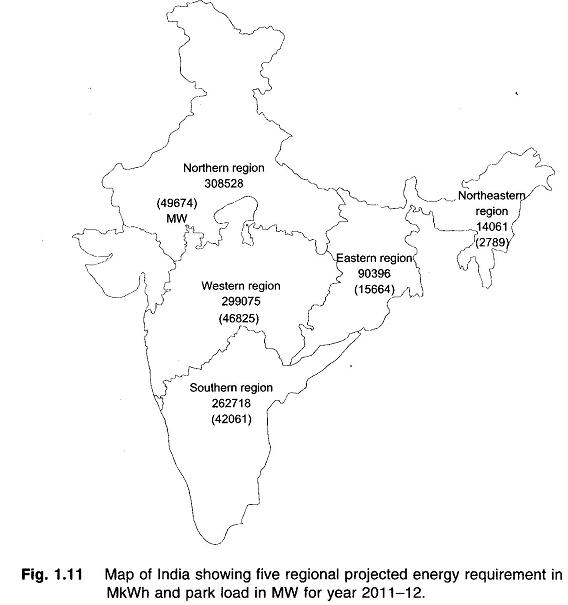 The emphasis during the Second Plan (1956-61) was on the development of basic and heavy industries and thus there was a need to step up power generation. The total installed capacity which was around 3420 MW at the end of the First Five Year Plan became 5700 MW at the end of the Second Five Year Plan. The introduction of 230 kV transmission voltage came up in Tamil Nadu and Punjab. During this Plan, totally about 1009 circuit kilometres were energized. In 1965-66, the total installed capacity was increased to 10,170 MW. During the Third Five Year Plan (1961-66) transmission growth took place very rapidly, with a nine-fold expansion in voltage level below 66 kV. Emphasis was on rural electrification. A significant development in this phase was the emergence of an inter-state grid system. The country was divided into five regions, each with a regional electricity hoard, to promote integrated operation of the constituent Power Systems Growth. Figure 1.11 shows these five regions of the country with projected energy requirement and peak load in the year 2011-12.

During the Fourth Five Plan, India started generating nuclear power. At the Tarapur Nuclear Plant 2 x 210 MW units were commissioned in April-May 1969. This station uses two boiling water reactors of American design. By August 1972, the first unit of 220 MW of the Rajasthan Atomic Power Project, Kota (Rajasthan), was added to the nuclear generating capability. The total generating capacity at Kota is 430 MW with nuclear reactors of Canadian design which use natural uranium as fuel and heavy water as a moderator and coolant. The third nuclear power station of 2 x 235 MW has been commissioned at Kalpakkam (Tamil Nadu). This is the first nuclear station to be completely designed, engineered and constructed by Indian scientists and engineers. A reactor research centre has been set up near the Madras Atomic Power Station to carry out study in fast breeder reactor technology. The fourth nuclear power plant has been set up at Narora in Uttar Pradesh. It has two units of 235 MW each. The fifth is in Kaiga in Karnataka and sixth in Gujarat near Surat, Kakrapar (440 MW). Several other nuclear power plants will be commissioned by 2012.

To be self-sufficient in power, BHEL has plants spread out all over the country and these turn out an entire range of power equipment, viz. turbo sets, hydro sets, turbines for nuclear plants, high pressure boilers, power transform-ers, switch gears, etc. Each plant specializes in a range of equipment. BHEL’s first 500 MW turbo-generator was commissioned at Singrauli. Today BHEL is considered one of the major power plant equipment manufacturers in the world.