Hopkinsons Test – This is a regenerative test in which two identical dc shunt machines are coupled mechanically and tested simultaneously. One of the machines is made to act as a motor driving the other as a generator which supplies electric power to motor. The set therefore draws only loss-power from the mains while the individual machines can be fully loaded. (Compare this test with Sumpner’s test on two identical transformers.)

Figure 7.67 shows the connection diagram for Hopkinsons Test. One of the machines of the set is started as a motor (starter connections are not shown in the figure) and brought to speed. The two machines are paralleled by means of switch S after checking that similar polarities of the machine are connected across the switch. If this is the case, the voltage across the switch can be almost reduced to zero by adjustment of the field currents of the machines. Otherwise the polarities of either one of the armatures or one of the fields must be reversed and the set restarted. The switch S is closed after checking that voltage across it is negligible so that heavy circulating current will not flow in the local loop of armatures on closing the switch.

The speed of the set and electric loading of the machines can be adjusted by means of rheostats placed in the two field circuits. The cause-effect relationship to load variation is given below:

Computation of losses and efficiencies

Since the generating machine excitation is more than that of the motoring machine,

their no-load iron (P10) and stray-load loss (Pit) are not quite equal. As there is no way of separating these in this test and the difference in any case is small, these are regarded as equal in the two machines. Hence 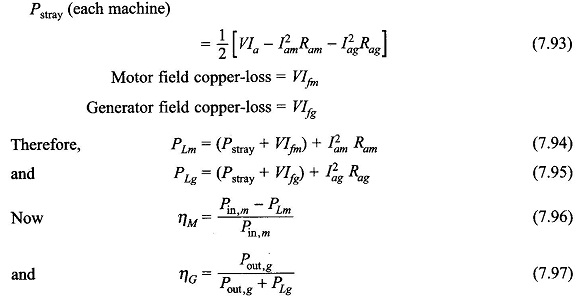