The basic human need for safe, efficient, and affordable light became the driving force which led to the Development of Electric Power Industry of today’s continent-spanning electric energy or power systems. In the mid-nineteenth century gaslight was the predominant but not very safe and practical means of illumination.

The inventive genius of Edison brought forth the electric incandescent light bulb and in the process created the need for an electricity supply system. The first electric “illuminating companies” came into being around 1880. The Pearl Street system in New York, built by Edison, became the most famous. It supplied electric tic power for lighting of lower Manhattan. The power was generated in steam-engine-driven dc ” dytiamos ” and distributed in underground cables. It is interesting to note that the system in its first eight years of operation had only one three-hour outage, thus setting a standard for reliability that has remained with the electric utility industry throughout its history.

Local electric illuminating companies grew rapidly throughout Europe and America in the first decade of the electric age. Then came, in the last decade of the century, the invention of the ac induction motor. Power for the growing industry had earlier been limited to the steam engine and to mechanical linkage systems powered by waterwheels. This tended to concentrate a maze of polluting industry around waterfalls. Things grew particularly bad around the famous Niagara Falls starting what was probably the first major environmental movement. “Free Niagara” became the slogan of the day. The idea was born of harnessing the power and somehow sending it off to distant industrial centers, thus freeing the river banks from Development of Electric Power Industry.

Niagara became the turning point where the future shape of the electric power systems was to be hammered out. European and American companies competed for the conceptual design. Of the final proposals for power generation and transmission systems seven were for electric, four for pneumatic, two for hydraulic, and one for wire-rope design. When finally, in 1896, the first two generators and the transmission line to Buffalo, N.Y., were put into service, a 25-Hz three-phase electric system had been chosen the winning design.

The electric induction motor developed into the dominating industrial powering device later to be installed in most powered home appliances. Lights and motors were followed in decades to come by a myriad of other electric-use objects which today collectively make up the “loads” in our power systems. In many industrial countries, the available hydro-power could not meet the constantly increasing demand for electricity, and new generating methods were sought. Steam-generated power became the most popular alternative after Parson had introduced his revolutionary steam turbine design. This machine made possible the utilization of the energy contents of the vast deposits of fossil fuels. In 1982, about three quarters of the United States’ electric power is derived from fossil fuels.

The introduction of the high-speed steam turbine made it necessary to increase the frequency, and 50-60 Hz are today commonly used. Rural electrification brought electricity to the farm country. As the local power systems thus expanded from cities outward they finally “grew together,” and by interconnection we finally created a nation-wide system. 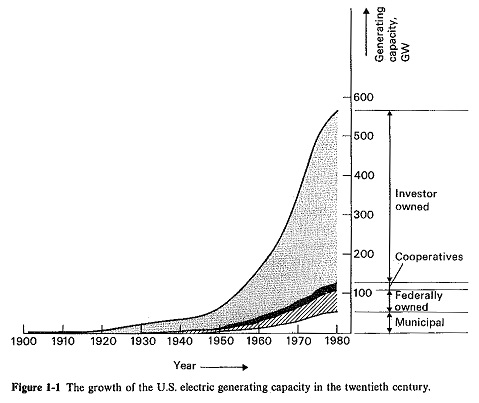 The growth of the U.S. electric utility industry during the first seven decades of the present century (Fig. 1-1) was essentially an exponential one with an the seventies. The total U.S. installed electric generating capacity, in, 1982, is nearly 600 GW which averages out to about 2.5 kW per person. A strong individual can exert on a sustained basis about 100 watts of muscle power. Thus, each American has available about 25 “electric slaves” who in a multitude of ways help make life easier. We have in fact become, for better or worse, so dependent upon this convenient energy form that society during rare local “blackouts” develops a case of paralysis.