The steps involved in Program Development and Execution of assembly language programs. Fig. 8.1 shows these steps. The left side of the figure shows the time period, at which each step in the overall process takes place. 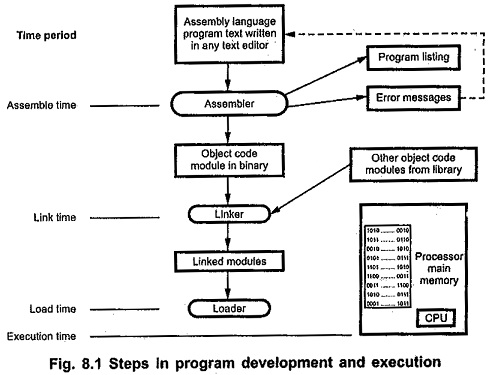 The object code module contains the information about where the program or module to be loaded in memory. If the object code module is to be linked with other separately assembled modules then it contains additional linkage information. At link time, separately assembled modules are combined into one single load module, by the linker.

Most linkers allow assembly language modules to be linked with object code modules compiled from high-level languages as well. This allows the programmer to insert a time-critical assembly language routines, library modules into a program.

At load time, the program loader copies the program into the computer’s main memory, and at execution time, program execution begins