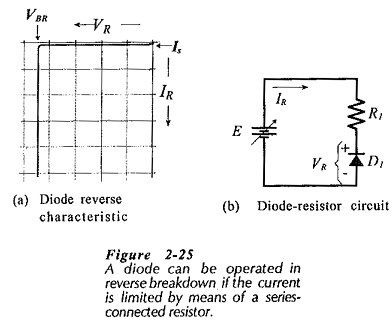 Diodes designed for operation in reverse breakdown are found to have a breakdown voltage that remains extremely stable over a wide range of current levels. This property gives the breakdown diode many useful applications as a voltage reference source.

In cases where the depletion region is too wide for Zener breakdown, the electrons in the reverse saturation current can be given sufficient energy to cause other electrons to break free when they strike atoms within the depletion region. This is termed ionization by collision. The electrons released in this way collide with other atoms to produce more free electrons in an avalanche effect. Avalanche breakdown is normally produced by reverse voltage levels above 5 V. Although Zener and avalanche are two different types of breakdown, the name Zener Diodes Characteristics is commonly applied to all breakdown diodes.

The circuit symbol for a Zener Diodes Characteristics in Fig. 2-26(a) is the same as that for an ordinary diode, but with the cathode bar approximately in the shape of a letter Z. The arrowhead on the symbol still points in the (conventional) direction of forward current when the device is forward biased. As illustrated, for operation in reverse bias, the voltage drop (VZ) is + on the cathode, – on the anode. 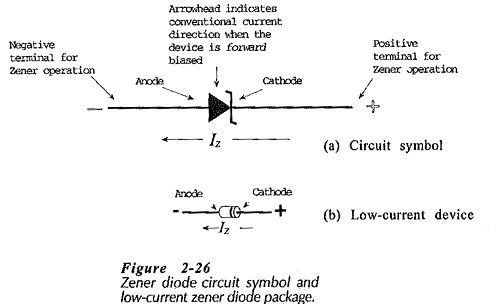 The typical Zener Diodes Characteristics are shown in detail in Fig. 2-27. Note that the forward characteristic is simply that of an ordinary forward-biased diode. Some important points on the reverse characteristic are:

The Zener diode current may be any level between IZK and IZM. For greatest voltage stability, the diode is normally operated at the test current. Many low-power Zener diodes have a test current specified as 20 mA, however, some devices have lower test currents. 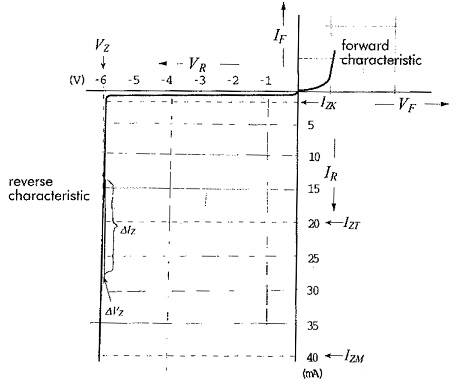 The data sheet also lists the dynamic impedance, reverse leakage current, and the temperature coefficient for the VZ of each device. The Zener voltages at any temperature can be calculated from, 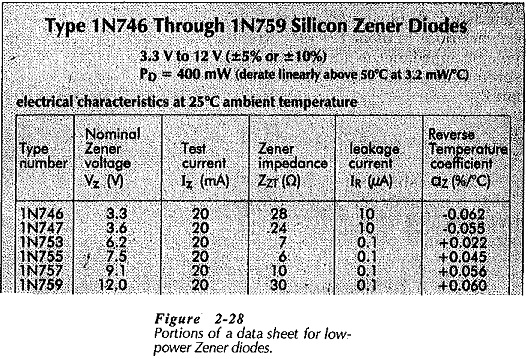