True RMS Voltmeter – Complex waveform are most accurately measured with an rms voltmeter. This instrument produces a meter indication by sensing waveform heating power, which is proportional to the square of the rms value of the voltage. This heating power can be measured by amplifying and feeding it to a thermocouple, whose output voltages is then proportional to the Erms.

However, thermocouples are non-linear devices. This difficulty can be overcome in some instruments by placing two thermocouples in the same thermal environment. 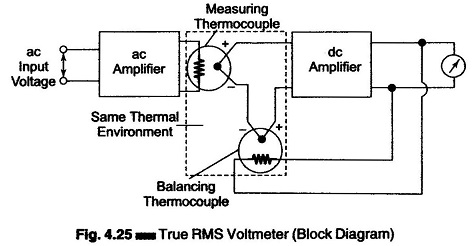 The unknown ac voltage is amplified and applied to the heating element of the measuring thermocouple. The application of heat produces an output voltage that upsets the balance of the bridge.

The dc amplifier amplifies the unbalanced voltage; this voltage is fed back to the heating element of the balancing thermocouple, which heats the thermocouple, so that the bridge is balanced again, i.e. the outputs of both the thermocouples are the same. At this instant, the ac current in the input thermo­couple is equal to the dc current in the heating element of the feedback thermo­couple. This dc current is therefore directly proportional to the effective or rms value of the input voltage, and is indicated by the meter in the output circuit of the dc amplifier. If the peak amplitude of the ac signal does not exceed the dynamic range of the ac amplifier, the true rms value of the ac signal can be measured independently.

There exists a fundamental difference between the readings on a normal ac meter and on a true rms meter. The first uses a D’ Arsonval movement with a full or half wave rectifier, and averages the values of the instantaneous rectified current. 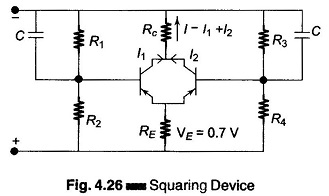 A true rms meter is always a combination of a normal mean value indicating meter and a squaring device whose output at any instant is proportional to the instantaneous squared input.

It can be shown that the ac component of the voltage developed across the common collector resistors of two transistors that are connected in parallel, and between the bases of which a small ac voltage is applied, is proportional to the square of the applied input voltage. 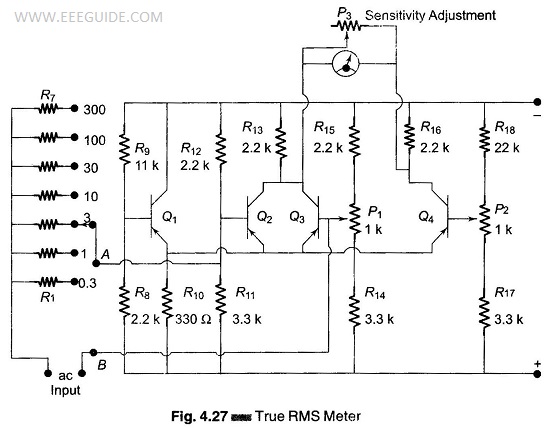 Potentiometer P1, base bias balance of the squaring circuit, must be adjusted for symmetrical operation of transistors Q2 and Q3. To do this, the polarity of a small dc input voltage applied to terminals A and B (bases of Q2 and Q3) has to be reversed, and the reading of the output meter must be the same for both input polarities.

The low current through Q2, Q3, Q4 requires a large emitter resistance value to fulfil the condition for compensation. Therefore, another transistor, Q1 has been added to compensate for the temperature changes of Q2 and Q3.

The bias on this transistor has to be adjusted by selecting appropriate values of R8 and R9 so that the voltage drop across R10 in the balanced condition is 0.7 V for silicon transistor.