In the event of prime-mover failure the machine starts motoring meaning thereby that it draws electrical power from the system and drives the prime-mover. This condition imposes a balanced load on the system, which can be detected by a power relay with a directional characteristic, as Prime Mover Protection illustrated in Fig. (6.20). It would detect this condition over the full power factor range. An auxiliary time-lag must be provided to prevent operation by synchronizing surges and power oscillations following system disturbances. 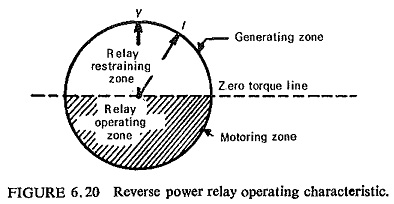 The load coming on the machine under such conditions are very low of the order of 1% of the machine rating in case of steam sets and 25% in case of engine driven sets.

However, in some cases such a condition could be very harmful as in the case of steam turbine sets where steam acts as coolant, maintaining the turbine blades at a constant temperature and the failure of steam results in overheating due to friction with subsequent distortion of the turbine blades.

Back pressure turbine sets and engine driven sets must be provided with reverse power protection. Whereas in condensing turbines the rate of temperature rise is low and such a Prime Mover Protection is not necessary. Hydroelectric generators are generally fitted with mechanical devices to disconnect the generator from the system should the water flow drop to a value likely to cause cavitation.

Backup reverse-power protection may be provided in unattended stations by sensitive directional relays with low settings of about 2% of rated power in conjunction with timing relay.