In a system where one machine is swinging with respect to an infinite bus, it is possible to study transient stability by means of a simple Equal Area Criterion in Power System, without resorting to the numerical solution of a swing equation. 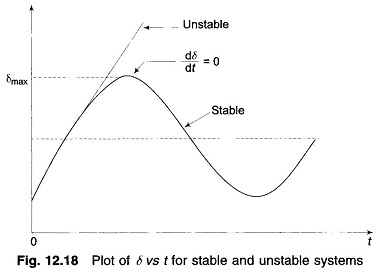 If the system is unstable δ continues to increase indefinitely with time and the machine loses synchronism. On the other hand, if the system is stable, δ(t) performs oscillations (nonsinusoidal) whose amplitude decreases in actual practice because of damping terms (not included in the swing equation). These two situations are shown in Fig. 12.18. Since the system is non-linear, the nature of its response [δ(t)] is not unique and it may exhibit instability in a fashion different from that indicated in Fig. 12.18, depending upon the nature and severity of disturbance. However, experience indicates that the response δ(t) in a power system generally falls in the two broad categories as shown in the figure. It can easily be visualized now (this has also been stated earlier) that for a stable system, indication of stability will be given by observation of the first swing where δ will go to a maximum and will start to reduce. This fact can be stated as a stability criterion, that the system is stable if at some time

and is unstable, if

for a sufficiently long time (more than 1 s will generally do).

The stability criterion for power systems stated above can be converted into a simple and easily applicable form for a single machine infinite bus system.

Multiplying both sides of the swing equation by (2 dδ/dt),  we get

where δ0 is the initial rotor angle before it begins to swing due to disturbance.

To illustrate the Equal Area Criterion in Power System of stability, we now consider several types of disturbances that may occur in a single machine infinite bus bar system.

Figure 12.19 shows the transient model of a single machine tied to infinite bus bar. The electrical power transmitted is given by 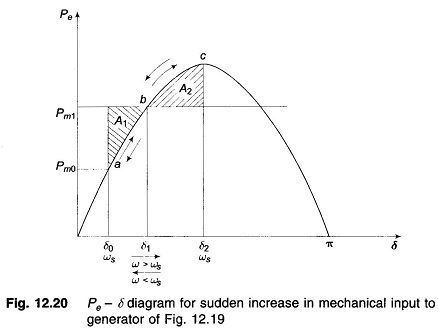 Since the rotor is decelerating, the speed reduces below ωs and the rotor angle begins to reduce. The state point now traverses the Pe – δ curve in the opposite direction as indicated by arrows in Fig. 12.20. It is easily seen that the system oscillates about the new steady state point b (δ = δ1) with angle excursion up to δ0 and δ2 on the two sides. These oscillations are similar to the simple harmonic motion of an inertia-spring system except that these are not sinusoidal.

As the oscillations decay out because of inherent system damping (not modelled), the system settles to the new steady state where

For the system to be stable, it should be possible to find angle δ2 such that A1 = A2. As Pm1 is increased, a limiting condition is finally reached when A1 equals the area above the Pm1 line as shown in Fig. 12.21. Under this condition, δ2 acquires the maximum value such that 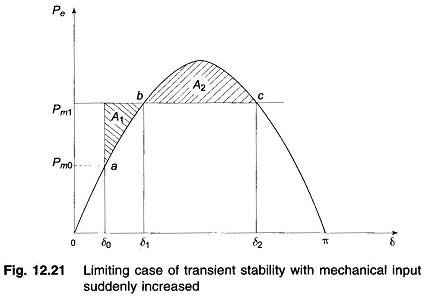 Any further increase in Pm1 means that the area available for A2 is less than A1, so that the excess kinetic energy causes δ to increase beyond point c and the decelerating power changes over to accelerating power, with the system consequently becoming unstable. It has thus been shown by use of the Equal Area Criterion in Power System that there is an upper limit to sudden increase in mechanical input (Pm1 – Pm0) for the system in question to remain stable.

It may also be noted from Fig. 12.21 that the system will remain stable even though the rotor may oscillate beyond δ = 90°, so long as the Equal Area Criterion in Power System is met. The condition of δ = 90° is meant for use in steady state stability only and does not apply to the transient stability case.

Effect of Clearing Time on Stability:

Let the system of Fig. 12.22 be operating with mechanical input Pm at a steady angle of δ0 (Pm = Pe) as shown by the point a on the Pe – δ diagram of Fig. 12.23. If a 3-phase fault occurs at the point P of the outgoing radial line, the electrical output of the generator instantly reduces to zero, i.e., Pe = 0 and the state point drops to b. The acceleration area A1 begins to increase and so does the rotor angle while the state point moves along bc. At time tc corresponding to angle δc the faulted line is cleared by the opening of the line circuit breaker. The values of tc and δc are respectively known as clearing time and clearing angle. The system once again becomes healthy and transmits Pe = Pmax sin δ i.e. the state point shifts to d on the original Pe – δ curve. The rotor now decelerates and the decelerating area A2 begins while the state point moves along de. 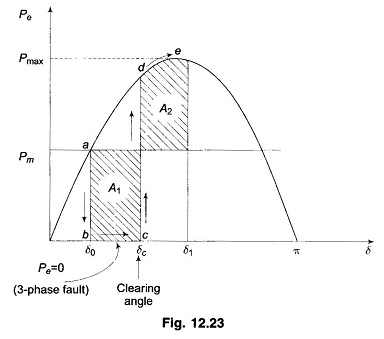 If an angle δ1 can be found such that A2 = A1, the system is found to be stable. The system finally settles down to the steady operating point a in an oscillatory manner because of inherent damping.

The value of clearing time corresponding to a clearing angle can be established only by numerical integration except in this simple case. The Equal Area Criterion in Power System therefore gives only qualitative answer to system stability as the time when the breaker should be opened is hard to establish. 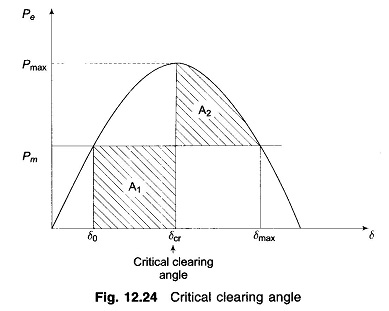 For this simple case (Pe = 0 during fault), explicit relationships for δc (critical) and tc (critical) are established below. All angles are in radians.

For the system to be stable, A2 = A1, which yields

During the period the fault is persisting, the swing equation is

An explicit relationship for determining tcr is possible in this case as during the faulted condition Pe = 0 and so the swing equation can be integrated in closed form. This will not be the case in most other situations.

Sudden Loss of One of Parallel Lines:

Consider now a single machine tied to infinite bus through two parallel lines as in Fig. 12.25a. Circuit model of the system is given in Fig. 12.25b. 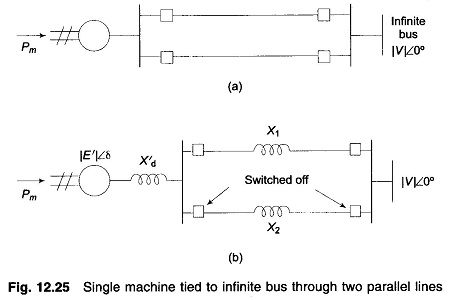 Let us study the transient stability of the system when one of the lines is suddenly switched off with the system operating at a steady load. Before switching off, power angle curve is given by

Immediately on switching off line 2, power angle curve is given by 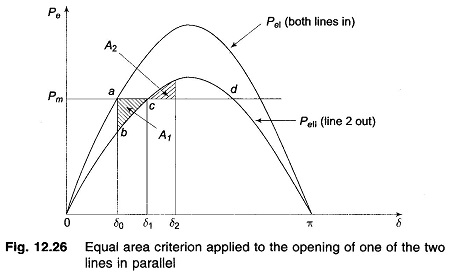 It is also easy to see that if the steady load is increased (line Pm is shifted upwards in Fig. 12.26), a limit is finally reached beyond which decelerating area equal to A1 cannot be found and therefore, the system behaves as an unstable one. For the limiting case of stability, δ1 has a maximum value given by

which is the same condition as in the previous example.

Sudden Short Circuit on One of Parallel Lines:

Case a: Short circuit at one end of line

Let us now assume the disturbance to be a short circuit at the generator end of line 2 of a double circuit line as shown in Fig. 12.27a. We shall assume the fault to be a three-phase one. 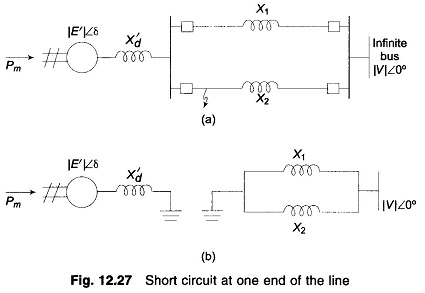 Before the occurrence of a fault, the power angle curve is given by

Upon occurrence of a three-phase fault at the generator end of line 2 (see Fig. 12.24a), the generator gets isolated from the power system for purposes of power flow as shown by Fig. 12.27b. Thus during the period the fault lasts,

The rotor therefore accelerates and angles δ increases. Synchronism will be lost unless the fault is cleared in time.

The power flow is now restored via the healthy line (through higher line reactance X2 in place of X1 || X2), with power angle curve 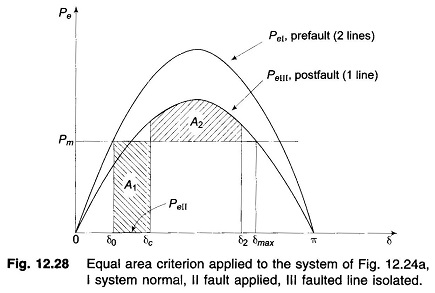 It also easily follows that larger initial loading (Pm) increases A1 for a given clearing angle (and time) and therefore quicker fault clearing would be needed to maintain stable operation.

Case b: Short circuit away from line ends 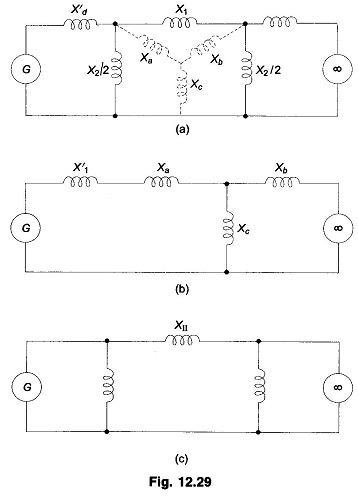 When the fault occurs away from line ends (say in the middle of a line), there is some power flow during the fault though considerably reduced, as different from case a where PeII = 0. Circuit model of the system during fault is now shown in Fig. 12.29a. This circuit reduces to that of Fig. 12.29c through one delta-star and one star-delta conversion. The power angle curve during fault is therefore given by

PeI and PeIII as in Fig. 12.28 and PeII as obtained above are all plotted in Fig. 12.30. Accelerating area A1 corresponding to a given clearing angle δc is less 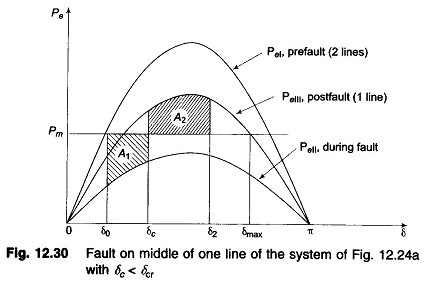 in this case, than in case a, giving a better chance for stable operation. Stable system operation is shown in Fig. 12.30, wherein it is possible to find an area A2 equal to A1 for δ2 < δmax. As the clearing angle δc is increased, area A1 increases and to find A2 = A1, δ2 increases till it has a value δmax, the maximum allowable for stability. This case of critical clearing angle is shown in Fig. 12.31. 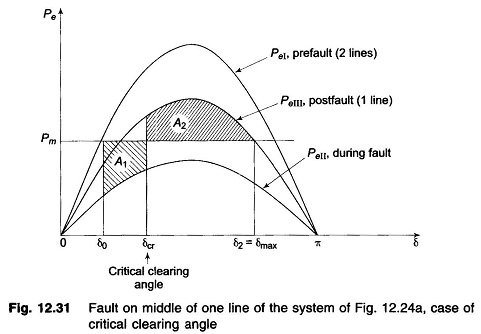 Applying Equal Area Criterion in Power System to the case of critical clearing angle of Fig. 12.31,

Critical clearing angle can be calculated from Eq. (12.67) above. The angles in this equation are in radians. The equation modifies as below if the angles are in degrees.

If the circuit breakers of line 2 are reclosed successfully (i.e., the fault was a transient one and therefore vanished on clearing the faulty line), the power transfer once again becomes 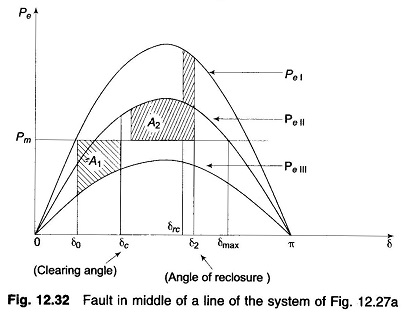 where trc = tcr + τ; τ = time between clearing and reclosure.