Using this method the stability of a linear system can be investigated very easily and quickly. It also indicates the number of roots, if any, on the right hand side of the s-plane. However, the method does not provide any infor­mation regarding the relative stability of the system. The method can be used to select the parameters which would make the system stable, mostly the gain constant of the system. In the case of controlled variable frequency drives this can be used to study the effect of variation of parameters on the stability of the drive system.

The coefficients of the characteristic equation are used to write down the first two rows of the Routhian array using alternate powers of s, in the order of descending powers. The missing terms are represented by zeros. These zeros cause sign changes in the first column indicating positive roots or complex roots with a positive real part. These two rows are used to build the complete array. The arithmetic manipulations in the development of the array may be made easier by dividing any row by a constant. The array is developed until a row of zeros appears, after a systematic formation of zeros in a step pattern in pairs. If the row of zeros appears before the array is complete, the subsidiary equation before the row of zeros is differentiated and substituted for the row of zeros. If the intermediate rows of the array has a zero in the first column, it presents a problem in developing the subsequent rows. This difficulty is overcome by multiplying the characteristic equation by (s + K). This does not alter the situation because s = – K is a negative root.

The application of the Routh Hurwitz Criterion is discussed in the following by means of an example.

Use Routh Hurwitz Criterion to establish a relation between K,T1,T2 so that the system is stable.

The characteristic equation of the system is

The Routh Hurwitz Criterion array is

For the system to be stable 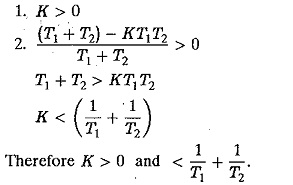