In an earth environment, electromagnetic waves propagate in ways that depend not only on their own properties but also on those of the environment itself; some of this was seen in the preceding section. Since the various methods of propagation depend largely on frequency, the complete electromagnetic spectrum is now shown for reference in Figure 8-11. Note that the frequency scale is logarithmic.

Waves travel in straight lines, except where the earth and its atmosphere alter their path. Except in unusual circumstances, frequencies above the HF generally travel in straight lines (except for refraction due to changing atmospheric density, as discussed in the previous section). They propagate by means of so-called space waves. These are sometimes called tropospheric waves, since they travel in the troposphere, the portion of the atmosphere closest to the ground.

Frequencies below the HF range travel around the curvature of the earth, sometimes right around the globe. The means are probably a combination of diffraction and a type of waveguide effect which uses the earth’s surface and the lowest ionized layer of the atmosphere as the two waveguide walls. These ground waves, or surface waves as they are called, are one of the two original means of beyond-the-horizon propagation. All broadcast radio signals received in daytime propagate by means of surface waves. 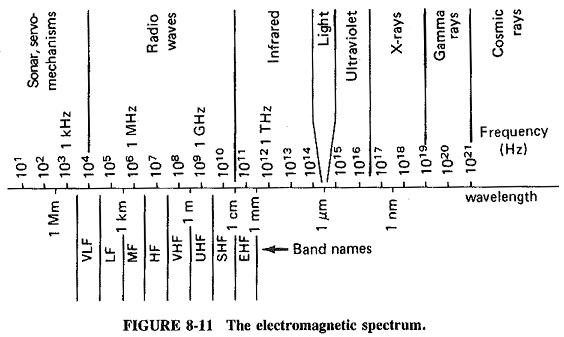 Waves in the HF range, and sometimes frequencies just above or below it, are reflected by the ionized layers of the atmosphere (to be described) and are called sky waves. Such signals are beamed into the sky and come down again after reflection, returning to earth well beyond the horizon.

To reach receivers on the opposite side of the earth, these waves must be reflected by the ground and the ionosphere several times. It should be mentioned that neither surface waves nor sky waves are possible in space or on airless bodies such as the moon.