Several choices are available in the selection of suitable circuits for obtaining Time Delay Circuit depending on the magnitude of the time delay required. Delays of the order of microseconds can be obtained by what are known as delay lines or cables usually employed in communication systems. The delay line or cable can be represented by an equivalent circuit consisting of a ladder network of reactors and capacitors as shown in Fig.. A.1.14.

Other types of circuits that can be used are resonant circuits (C-L circuits) which give delays of the order of milliseconds while R-C circuits give much longer Time Delay Circuit. As will be seen in later chapters, R-C circuits are very frequently employed in time current relays and other types of timers.

It is found that the accuracy of a timing circuit depends on the leakage currents in capacitors and the transistors that are used in the successive stages of the circuit. Also temperature and supply voltage variations affect their accuracy. In all such cases some amount of compensation is to be used like temperature compensation. Other methods that can improve the circuit performance are aging of the circuit by heat soaking and prevention of the transistor circuit from operation till the timing capacitors is charged—this can be done by using a diode before the transistor level detector circuit. All 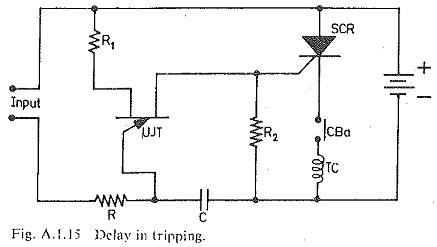 As stated in Section 4, thyristors SCR) are being used in the final trip circuits of the circuit breakers. Where delays are necessary to be incorporated in such SCR trip circuits, it is possible to obtain such delays by using a uni-junction transistor (UJT) as shown in Fig. A.1.15; where R-C coimbination gives the necessary Time Delay Circuit. This also compensates for the variation of the SCR trigger voltage with temparature since in this case the UJT supplies the necessary trigger voltage.