In this circuit, all the input signals to be added are applied to the inverting input terminal, of the op-amp. The circuit with two input signals is shown in the Fig. 2.25. 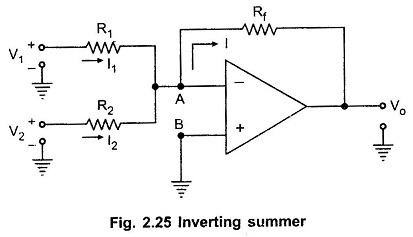 Now from input side,

Applying at node A and as input op-amp current is zero,

By properly selecting Rf, R1 and R2, we can have weighted addition of the input signals like aV1 + bV2, as indicated by the equation (6).
Infact in such a way, n input voltages can be added.

Thus the magnitude of the output voltage is the sum of the input voltages and hence circuit is called as summer or adder circuit. Due to the negative sign of the sum at the output it is called inverting summing amplifier. It shows that there is phase inversion. 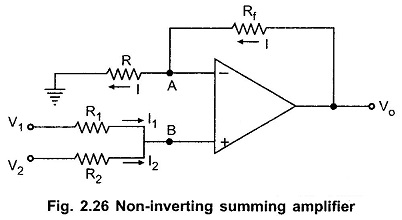 Let the voltage of node B is VB. Now the node A is at the same potential as that of B.

From the input side,

But as the input current of op-amp is zero,

The equation (8) shows that the output is weighted sum of the inputs.

As there is no phase difference between input and output, it is called non inverting summing amplifier.

If in the inverting summer amplifier circuit, the values of resistance are selected as,

Thus the magnitude of the output voltage is the average of the two input voltages. So circuit acts like an averager.
Similarly average of n inputs can be calculated by selecting