where Pr is the power absorbed by the source Vr. The magnitude and sign of Pr can be controlled by controlling the magnitude and phase of Vr. When Pr is zero, motor runs on its natural speed torque characteristic. A positive Pr will reduce Pm, and therefore, motor will run at a lower speed for the same torque. When Pr is made equal to Pg, then Pm and consequently speed will be zero. Thus, variation of Pr from 0 to Pg will allow speed control from synchronous to zero speed. Polarity of Vr for this operation is shown in Fig. 6.53 by a continuous line.

When Pr is negative, i.e. Vr acts as a source of power, Pm will be larger than Pg and motor will run at a speed higher than synchronous speed. Polarity of Vr for speed control above synchronous speed is shown by a dotted line in Fig. 6.53.

It provides the speed control of a wound rotor motor below synchronous speed. A portion of rotor ac power is converted into dc by a diode bridge. The controlled rectifier working as an inverter converts it back to ac and feeds it back to the ac source. Power fed back (i.e. Pr) can be controlled by controlling inverter counter emf Vd2, which in turn is controller by controlling the inverter firing angle. The dc link inductor is provided to reduce ripple in dc link current Id.

Since Slip Power Recovery Scheme used in Induction Motor is fed back to the source, unlike rotor resistance control where it is wasted in resistors, drive has a high efficiency. The drive has higher efficiency than stator voltage control by ac voltage controllers because of the same reasons.

From Fig. 6.54(a), neglecting stator and rotor drops

where α is the inverter firing angle and, n and m are, respectively, the stator to rotor turns ratio of motor and source side to converter side turns ratio of the transformer. Neglecting drop across inductor

Maximum value of α is restricted to 165° for safe commutation of inverter thyristors. Slip can be controlled from 0 to 0.966a when α is changed from 90 to 165°. By appropriate choice of a, required speed range can be obtained.

Transformer is used to match the voltages Vd1 and Vd2. At the lowest speed required from the drive, Vd1 will have the maximum value Vd1m given by

where smax, is the value of slip at the lowest speed. If α is restricted to 165°, m is chosen such that the inverter voltage has a value Vd1m when α is 165° i.e.

If rotor copper loss is neglected

Drive is started by resistance control with S1 closed and S2 open (Fig. 6.54). When speed reaches within control range of the drive, S2 is closed to connect diode bridge and inverter is activated. Now S1 is opened to remove the resistances.

In fan and pump drives braking is not required, because the fluid pressure provides adequate braking torque. To maintain constant fluid flow with variations in pressure head and the nature of pumped fluid, the drive is operated with a closed loop speed control. A close loop speed control scheme with inner current control is shown in Fig. 6.56. It operates in the same way as the scheme of Fig. 3.5.

This drive is widely used in medium and high power (up to around 10 MW) fan and pump drives, because of high efficiency and low cost.

Rotor slip power is converted into dc by a diode bridge (Fig. 6.57(a)). The dc power is now fed to dc motor mechanically coupled to induction motor. Torque supplied to load is sum of torque produced by induction and dc motors. Speed control is obtained by controlling field current of dc motor. 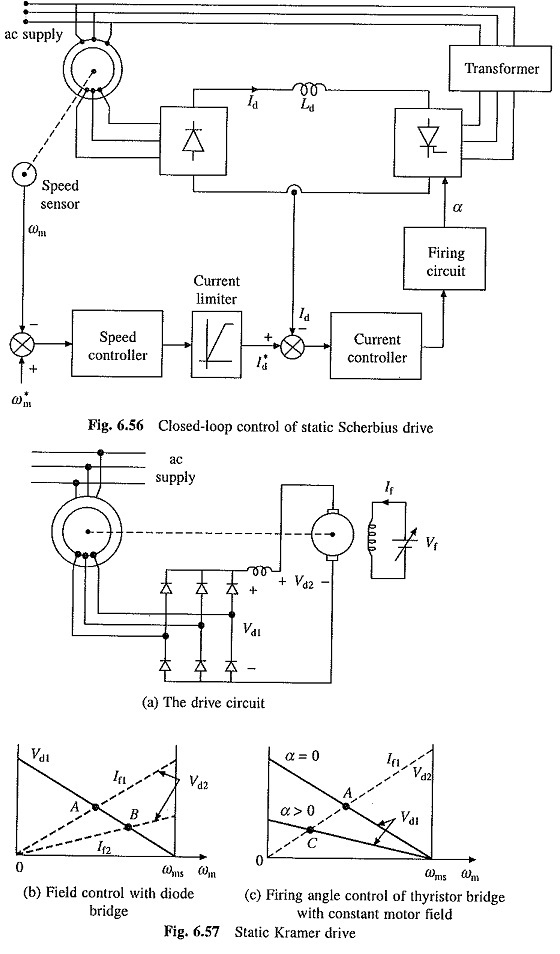 Figure 6.57(b) shows variations of Vd1 and Vd2 with speed for two values of dc motor field current. The steady state operation is obtained when Vd1 = Vd2, i.e. at A and B for field currents If1 and If2. Speed control is possible from synchronous speed to around half of synchronous speed. When larger speed range is required, diode bridge is replaced by a thyristor bridge. Now relationship between Vd1 and speed can be altered by controlling firing angle of thyristor rectifier (see Fig. 6.57(c)). Speed can now be controlled up to standstill.