Fig. 7.13(a) is the Norton’s equivalent of the synchronous motor equivalent circuit of Fig. 7.2. Where

The phasor diagram of the motor with Is as a reference phasor is shown in Fig. 7.13(b). The mechanical power developed is

Hence torque is proportional to Is. 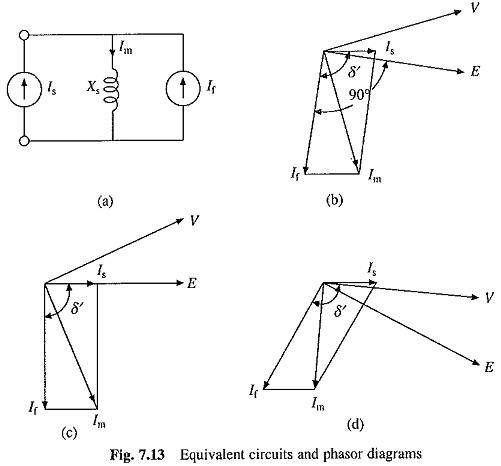 Flux Weakening : There are applications which require speed control in wide range. In wound field motors, the operation up to the base speed is obtained by varying both voltage and frequency. The speed control above the base speed is obtained by reducing the air-gap flux so that motor terminal voltage remains at the rated value as frequency is increased. In Fig. 7.13(c), air-gap flux can be reduced by reducing Im. In a would field machine this can be achieved by reducing If by reducing field current. This cannot be done in a permanent magnet machine. However, Im for a given Is can be progressively reduced by increasing δ′ with speed, as shown in the phasor diagram of Fig. 7.13(d). At δ = 90°, Is is in quadrature with If For δ′ > 90°, Is can be resolved into two components, one in quadrature with If and another in phase opposition to If, which causes reduction in Im and air-gap flux.

The block diagram of a closed loop variable speed drive employing sinusoidal PMAC motor fed from current regulated VSI is shown in Fig. 7.14. The operation of a current regulated VSI is described in Sec. 6.18. It employs a 3-phase voltage source inverter [Fig. 6.37(a)]. The inverter is operated to supply motor three phase currents of the magnitude and phase as commanded by reference currents i*A, i*B and i*C, which are generated by a reference current generator. 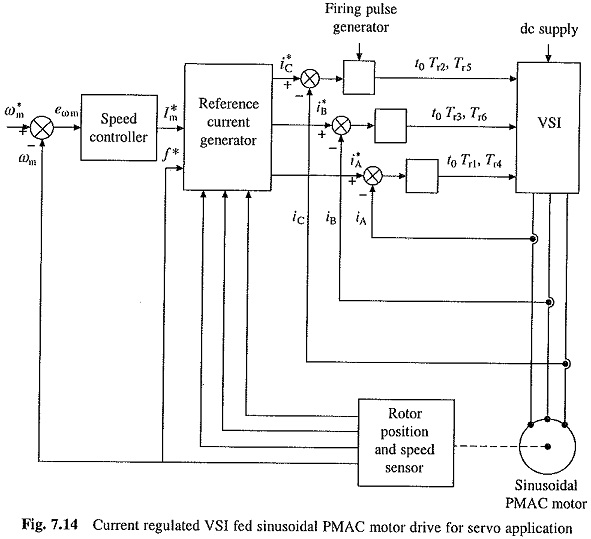 Since sinusoidal current template is to be generated based on the rotor position, an absolute rotor position sensor or resolver is required, which is expensive. Because of features like excellent dynamic performance, and low torque ripple, the drive is widely used in high performance servo drives inspite of its high cost.

For the production of maximum torque for a given stator current, the rotating fields produced by the stator and rotor should have an angle of 90°. The statorfield will be along phase A axis when the current in phase A reaches its positive peak. The rotor South Pole axis, at this instant must be 90° electrical behind. Therefore, rotor South Pole axis must be 180° electrical behind phase A axis at the positive zero crossing of phase A current. This information is utilized to locate the rotor position sensor.

A servo drive for closed-loop position control is obtained by adding a position loop around the speed loop in Fig. 7.14.