Consider the Op Amp Integrator Circuit as shown in the Fig. 2.35.. 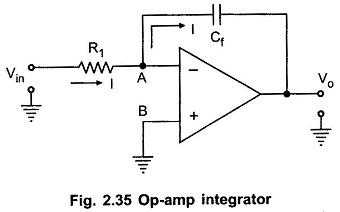 The node B is grounded. The node A is also at the ground potential from the concept of virtual ground

As input current of op-amp is zero, the entire current I flowing through R1, also flows through C f, as shown in the Fig. 2.35.

From input side we can write,

From output side we can write,

where Vo(0) is the constant of integration, indicating the initial output voltage.

The equation (5) shows that the output is -1/R1Cf times the integral of input and R1Cf is called time constant of the integrators.

The negative sign indicates that there is a phase shift of 180° between input and output. The main advantage of such an active integrators is the large time constant. By Miller’s theorem the effective capacitance between input terminal A and the ground becomes Cf (1-Av) where Av is the gain of the op-amp which is very large. Due to such large effective capacitance, time constant is very large and thus a perfect integration results due to such circuit. 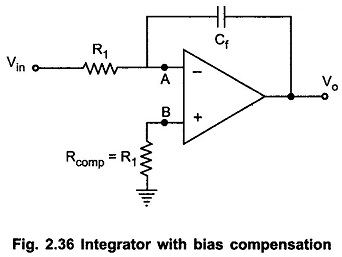 Sometimes a resistance Rcomp = R1 is connected to the noninverting terminal to provide the bias compensation. This is shown in the Fig. 2.36. As the input current of op-amp is zero, the node B is still can be treated at ground potential in this circuit. Hence the above analysis is equally applicable to the integrators circuit with bias compensation. And the output is the perfect integration of the input.

Let us see the output waveforms, for various input signals. For simplicity of understanding, assume that the time constant R1Cf = 1 and the initial voltage Vo(0) = 0V.

Let the input waveform is of step type, with a magnitude of A units as shown in the Fig. 2.37. 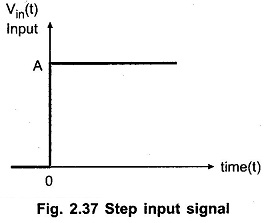 Mathematically the step input can be expressed as, 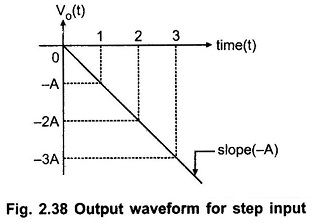 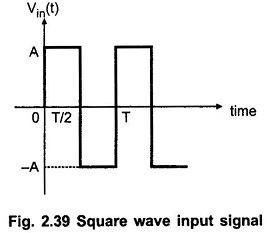 This is the expression for the input signal for one period. 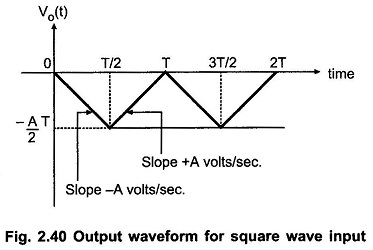 Let the input waveform is purely sinusoidal with a frequency of ω rad/sec. Mathematically it can be expressed as,

where Vm is the amplitude of the sine wave and T be the period of the waveform.

Thus it can be seen that the output of an integrators is a cosine waveform for a input. Due to inverting integrators, the output waveform is as shown in the Fig. 2.41. 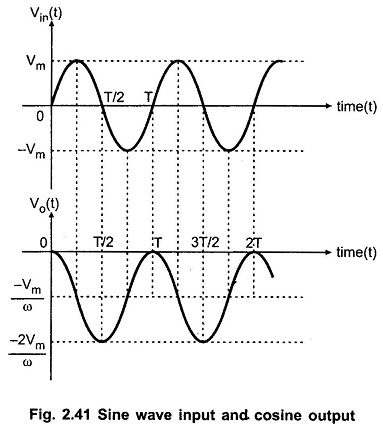 Errors in an Ideal Integrator:

The operation amplifier has input offset voltage (Vios) and the input bias current (Ib). In the absence of input voltage or at zero frequency (d.c.), op-amp gain is very high. The input offset voltage gets amplified and appears at the output as an error voltage. The bias current also results in a capacitor charging current and adds its effect in an output error voltage. The two components, due to high d.c. gain of op-amp cause output to ramp up or down, depending upon the polarities of offset voltage and/or bias current. After some time, output of op-amp may achieve its saturation level. Hence there is a possibility of op-amp saturation due to such an error voltage and it is very difficult to pull op-amp out of saturation. Thus the output of an ideal integrators in the absence of input signal is likely to be offset towards the positive or negative saturation levels.

Due to all these limitations, an ideal integrators is not used in practice. Some additional components are used along with the basic integrator circuit to reduce the effect of an error voltage, in practice. Such an integrator is called Practical Integrators Circuit.

The limitations of an ideal integrators can be minimized in the practical integrators circuit, which uses a resistance Rf in parallel with the capacitor Cf.

The practical integrators circuit is shown in the Fig. 2.42. 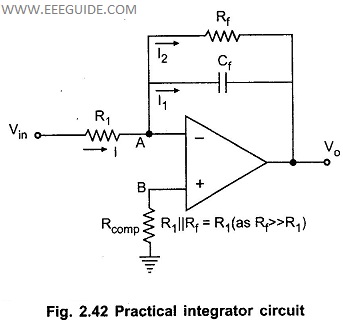 The Analysis of Practical Integrators:

At node A, applying KCL

Taking Laplace of this equation, 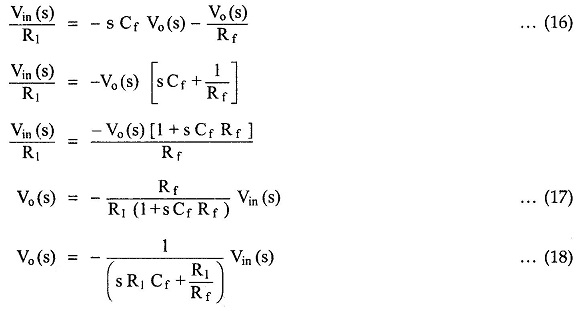 The Practical Integrator circuits are most commonly used in the following applications :