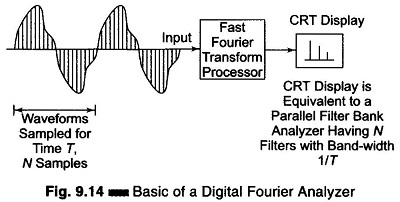 The discrete spectral response Sx (k Δ f); k = 1, 2,…, N which is equivalent to simultaneously obtaining the output from N filters having a bandwidth given by Δf = 1/T, is obtained by applying a Discrete Fourier Transform (DFT) to the sampled version of the signal. The spectral response is thus given by

The discrete inverse transform is given by

Since Sx (k · Δ f); k = 1, 2, …, N is a complex quantity, the DFT provides both amplitude and phase information at a particular point in the spectrum.

The discrete transforms are usually implemented by means of the Fast Fourier Transform (FFT), which is particularly suitable for implementation in a digital computer, since N is constrained to the power of 2, i.e. 210 = 1024. 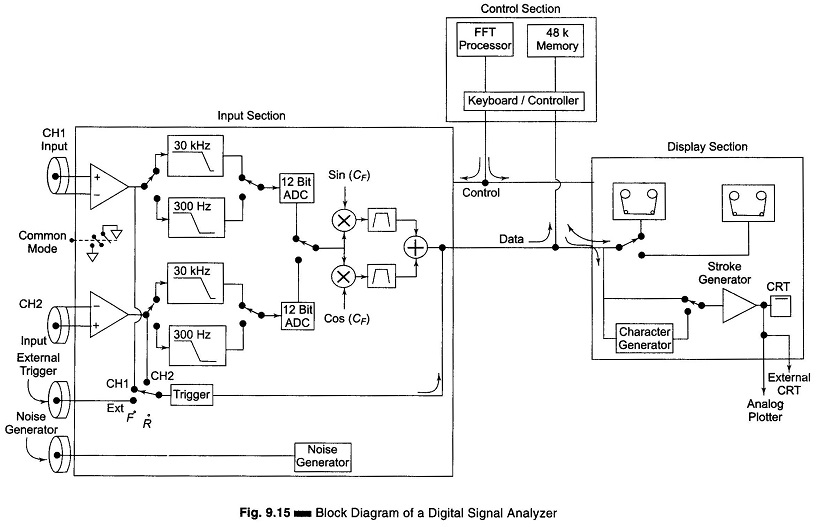 The block diagram is divided into three sections, namely

The input section consists of two identical channels. The input signal is applied to the input amplifier, where it is conditioned and passed through two or more anti-aliasing filters. The cut-off frequencies of these filters are selected with respect to the sampling frequency being used. The 30 kHz filter is used with a sampling rate of 102.4 kHz and the 300 kHz filter with a sampling rate of 1.024 MHz.

To convert the signal into digital form, a 12 bit ADC is used. The output from the ADC is connected to a multiplier and a digital filter.

The processing section of the analyzer provides FFT processing on the input signal (linear or logarithm).

where Sx (f)* indicates the complex conjugate of Sx (f).

The Inverse Fourier Transform of Gxx (f) is given by

writing the above equation in terms of the time domain characteristics of the signal x(t), its autocorrelation function is defined as

where Sy (t) is the linear spectrum of y(t) and Sx(t)* is the complex conjugate spectrum of x(t).

If x(t) represents the input to a system and y(t) the output of the system, then its transfer function H(f), which contains both amplitude and phase information can be obtained by computing

where the bars indicate the time averaged values.

The input signal used for such measurements is often the internal random noise generator.