Let us discuss in brief, the AC Fundamentals necessary to analyse the networks consisting of various alternating current and voltage sources, resistances and inductive, capacitive reactances.

An alternating current or voltage is the one which changes periodically both in Cycle magnitude and direction. Such Change in magnitude and direction is measured in terms of cycles. Each cycle of AC Fundamentals consists of two half cycles namely positive cycle and negative cycle. Current increases in magnitude, in one particular direction, attains maximum and starts decreasing, passing through zero it increases in opposite direction and behaves similarly. The Fig. 1.14 shows a graph of alternating quantity against time.

The number of cycles completed by an alternating quantity per second is known as its frequency. It is denoted by ‘f’ and measured in cycles/second i.e. Hertz (Hz). As the time period is the time requited to complete one cycle, we can write,

The maximum value attained by an alternating quantity during positive or negative half cycle is called its amplitude. The mathematical equation giving the instantaneous value of an alternating voltage is given by,

Similarly an alternating current can be expressed as,

The r.m.s values are denoted by the capital letters as Vor I. Practically in AC Fundamentals analysis, most of the currents and voltages are not in phase but have some phase difference in between them.

If current lags the voltage by angle φ then its mathematical equation is,

While if current leads the voltage by angle φ then it is expressed as,

Then the corresponding phasor diagram representing this voltage and current is shown in the Fig. 1.15. In such a case we say that the current lags voltage by angle φ

Similarly consider voltage as v = Vm sin ωt and the current as,

This indicates that there is a phase difference of φ, in between them. As it is-positive, current leads voltage by an angle φ as shown in the Fig. 1.16.

Remember that while deciding lagging or leading nature of the current, the direction of rotation of phasors is always anticlockwise.

The various current and voltage phasors can be represented in polar form or rectangular form.

Consider a general equation of an alternating quantity as,

Hence in polar co-ordinate system, an alternating quantity is represented as,

Generally instead of magnitude Em the r.m.s. value of an alternating quantity is used.

This phasor lies along x-axis.

Similarly an alternating current also can be represented in the polar form.

Now consider a phasor shown in the Fig. 1.18. In polar form it is represented as E∠±φ. 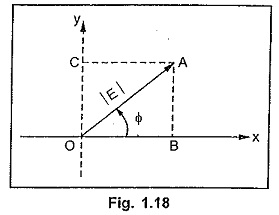 The point A can be represented in the rectangular form with x co-ordinate and y co-ordinate.

Thus if φ = 0 then the y co-ordinate of the corresponding quantity is also zero.

Thus in polar form if quantity is represented as E∠±φ then its rectangular form is E cosφ ± j E sin φ.

If the rectangular form is known then the magnitude and phase in polar form can be obtained as,

Note : Students are advised to use the functions rectangular to polar (R—>P) and polar to rectangular (P—> R), for conversions, directly available in the scientific calculators. It must be noted that while doing any mathematical operations the magnitudes and phases of the alternating quantities must be considered. No operation should be done algebracially only on the magnitudes of the alternating quantities.

If there are two alternating quantities as,

Then the addition or subtraction of the two is done in the rectangular form as,

While multiplication or division of the two is done in the polar form as,

Let us summarize the behaviour of R, L and C in the tabular form. 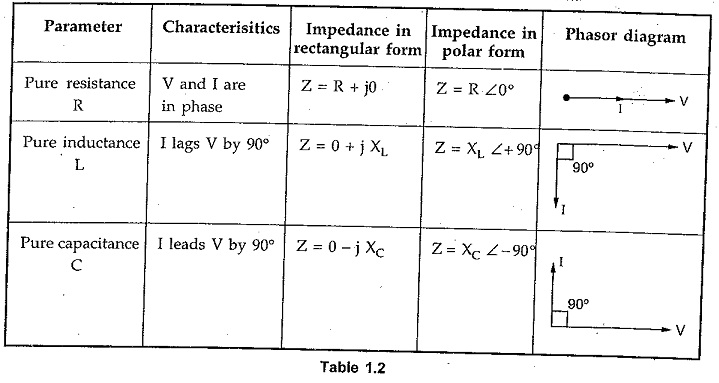 Thus for R – L series circuit, the impedance is represented as,

In such circuit, current lags voltage by angle θ.

For R-C series circuit, the impedance is represented as,

In this case θ is negative and current leads voltage by angle θ.

The numerical value of cosine of the phase angle between the applied voltage and the current drawn from the supply voltage gives the power factor. It is also defined as the ratio of resistance to the impedance.It is denoted as cos φ.

For other combinations, the p.f. is defined as lagging or leading i.e. whether the resultant current lags or leads the supply voltage.

The power in AC Fundamentals circuit is given by,

Now pure inductance and capacitance does not consume any power as cos φ = 0 for such circuits. Only resistance consumes power. Hence power also can be obtained as, 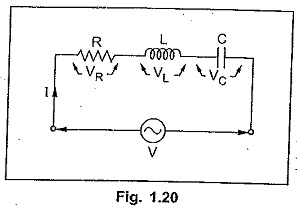 The impedance is given by,

If XL = XC then circuit becomes purely resistive and I is in phase with V.

The voltage drops across the various elements are denoted as VR, VL and VC. The magnitudes of these drops are given by,