Viscosity Unit is the property of a fluid which determines the amount of resistance to a shearing stress. A real fluid has no viscosity but it is non­existent.

Viscosity can also be defined as the property of a fluid due to which it offers resistance to the movement of one layer of fluid over another adjacent layer.

Viscosity increases with increase in temperature in case of gases whereas it decreases in case of liquid.

According to Newton’s law of viscosity the shear force, F acting between two layers of fluid is proportional to difference in their velocities du and area A of the plate and inversely proportional to the distance dy between them..

μ (Mu) is the constant of proportionality or co-efficient of dynamic viscosity or Viscosity Unit. Its unit can be derived as

As explained earlier, the dynamic viscosity (μ) is defined as the shear stress required causing unit rate of shear deformation. 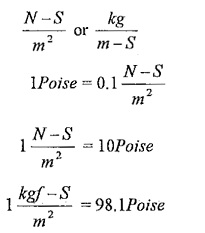 It is often measured in ‘stokes’.

Since, water has a viscosity of 1, it is taken as standard substance for relative viscosity.

It states that the shear stress τ on fluid element, layer is directly proportional to the rate of shear strain. The constant of proportionality is called coefficient of viscosity.

The fluids which follow this law is known as Newtonian, fluids otherwise, it is known as Non-Newtonian fluids.

Effects of temperature on viscosity:

Variation of Viscosity Unit with respect o temperature for some common fluids are given in fig 1.2(b). 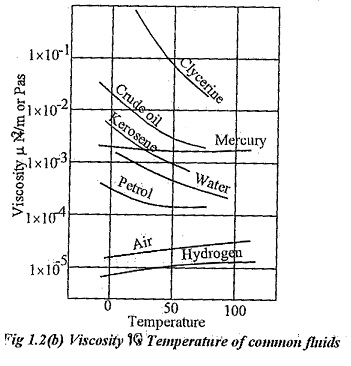 In case of gases, the contribution to viscosity is more due to momentum transfer. When temperature increases, more molecules cross over with higher momentum differences. Hence, viscosity of gases increases with temperature.