Chebyshev Approximation – In the earlier section, we have studied that the Butterworth approximation is the best at ω = 0. But as we move towards cut-off frequency, ωc = 1, approximation becomes poorer. It departs from ideal characteristics.

The Chebyshev polynomials for different values of n are as given in the Table 9.11. 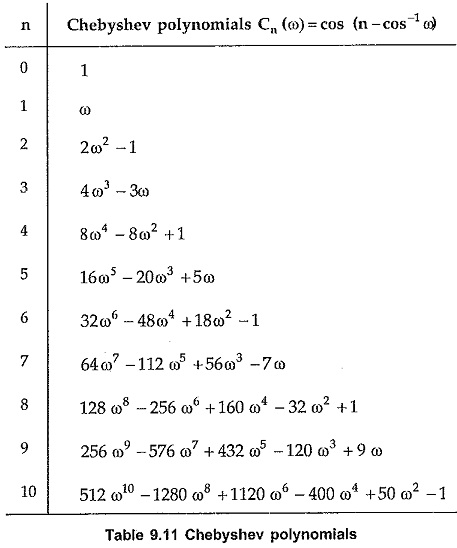 The behaviour of Chebyshev polynomials with the variation of ω is as shown in Fig. 9.48. 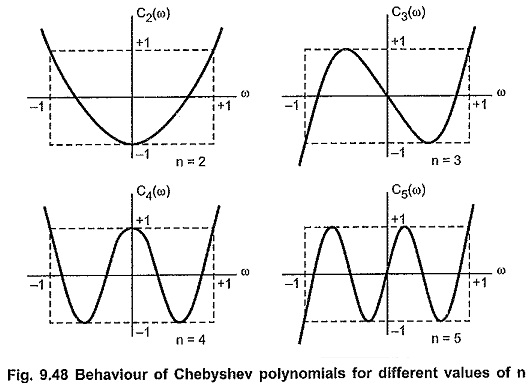 Some important properties of Chebyshev polynomials useful in low-pass filter approximation are as follows :

After the summary of few properties of Chebyshev polynomials, let us study how to use Chebyshev polynomials in low-pass filter approximation. Consider the function ε2 C2n(ω) where ε is the real number which is very small compared to unity. As seen from above properties ε2 C2n(ω) will vary between 0 and ε2 is the interval |ω|≤1 as C1(ω) = 1. Let us add 1 to this function making it 1 + ε2 C2n(ω). This new function will vary between 1 and 1+ε2 for |ω|≤1 where (1 + ε2) is slightly greater than 1. Inverting this new function and relating it to the square of the magnitude we get

In the interval fro |ω|≤1 i.e. in the pass band, the square of the magnitude will oscillate or ripple about a unity such that maximum value is 1 while minimum is 1/(1+ε2) Outside interval |ω|≤1 i.e. stop band, C2n(ω) becomes very large such that |M(jω)|2 approaches zero very rapidly with increase in co. Hence it is most suitable for ideal low pass filter characteristics.

The Chebyshev approximation to the ideal low-pass filter is as shown in Fig. 6.49. 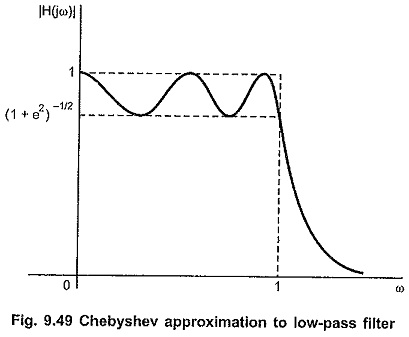 Within the pass band 0 ≤ ω ≤ 1, the magnitude M (jω) oscillates or ripples between 1 and √1+ε2. The distance between maximum and minimum in the pass band is called ripple height and it is given by,

In the stop band, the loss or attenuation expressed in dB is given by

But for large ω, Cn(ω) can be expressed as,

Substituting value of Cn(ω) from equation (12) in the expression for loss,

In most of the applications ε is very small, which gives 20 log ε term negative. Thus it is necessary to compensate this decrease in the loss in the stop band. To achieve this, a filter of sufficiently higher order is selected.

Basically Chebyshev approximation depends upon two variables namely ε and n. These two values can be determined directly from the specifications given for the filter. The value of ε is determined from maximum permissible ripple. Once the value of ε is fixed, value of n can be found from the required attenuation in stop band.