We Know that electromechanical energy conversion takes place whenever a change in flux is associated with mechanical motion. Speed voltage is generated in a coil when there is relative movement between the coil and magnetic field. Alternating emf is generated if the change in flux linkage of the coil is cyclic. The field windings which are the primary source of flux in a Rotating Electrical Machines are, therefore, arranged to produce cyclic north-south space distribution of poles.

A cylindrical structure is a natural choice for such a Rotating Electrical Machines. Coils which are the seats of induced emf are several in number in practical Rotating Electrical Machines and are suitably connected in series/parallels and in star/delta 3-phase connection to give the desired voltage and to supply the rated current. This arrangement is called the armature winding. When the armature coils carry currents they produce their own magnetic field which interacting with the magnetic field of the field winding produces electro-magnetic torque tending to align the two magnetic fields.

The field winding and armature winding are appropriately positioned on a common magnetic circuit composed of two parts—the stator (stationary member) and the rotor (rotating member). The stator is the annular portion of a cylinder in which rotates a cylindrical rotor; there being an appropriate clearance (air-gap) between the two. The rotor axle is carried on two bearings which are housed in two end-covers bolted on the two sides of the stator as shown in Fig. 5.1. The stator and rotor are made of high permeability magnetic material—silicon steel. Further, the member in which the flux rotates is built up of thin insulated lamination to reduce eddy-current loss.

Since electromechanical energy conversion requires relative motion between the field and armature winding, either of these could be placed on the stator or rotor. Because of practical convenience, field windings are normally placed on the rotor in the class of machines called the synchronous machines; the cross-sectional view of one such machine is shown in Fig. 5.1 The armature winding is housed in suitably shaped slots cut out in the stator. The field winding is supplied with dc from an external source, called the exciter, through a pair of slip-rings as shown in Fig. 5.1. The exciter is generally coupled directly to the rotor shaft of the synchronous machine. 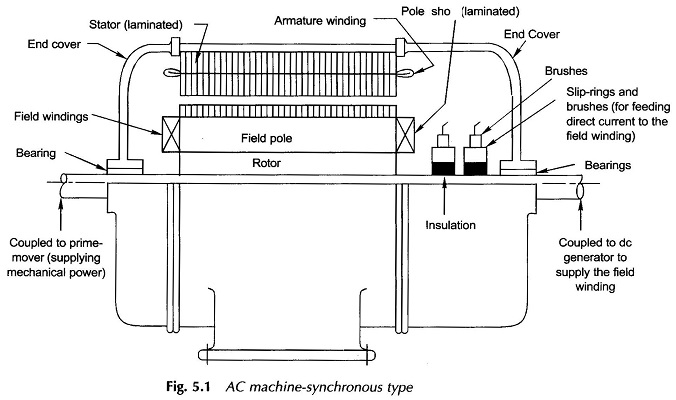 In an induction machine the stator has a 3-phase winding which draws a component of current from the mains to set up a cyclic flux pattern in the air-gap which rotates at a speed corresponding to supply frequency (synchronous speed) and the rotor is either properly wound and the winding is short-circuited or is merely a set of copper (or aluminium) bars placed in rotor slots short-circuited at each end by means of end-rings.

In dc machines a most convenient and practical arrangement is to generate alternating voltages and to convert these to dc form by means of a rotating mechanical rectifier. Therefore, it is necessary that the armature winding in a dc machine is on the rotor and the field winding on the stator.