The reliability of Laying of Underground Cables network depends to a considerable extent upon the proper laying and attachment of fittings i.e., cable end boxes, joints, branch connectors etc.

There are three main methods of Laying of Underground Cables viz., 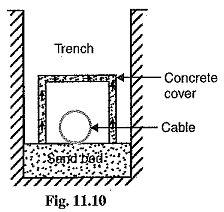 1.Direct laying: This method of Laying of Underground Cables is simple and cheap and is much favoured in modern practice. In this method, a trench of about l .5 meters deep and 45 cm wide is dug. The trench is covered with a layer of fine sand (of about 10 cm thickness) and the cable is laid over this sand bed. The sand prevents the entry of moisture from the ground and thus protects the cable from decay. After the cable has been laid in the trench, it is covered with another layer of sand of about 10 cm thickness.

The trench is then covered with bricks and other materials in order to protect the cable from mechanical injury. When more than one cable is to be laid in the same trench, a horizontal or vertical inter-axial spacing of at least 30 cm is provided in order to reduce the effect of mutual heating and also to ensure that a fault occurring on one cable does not damage the adjacent cable. Cables to be laid in this way must have serving of bituminised paper and hessian tape so as to provide protection against concision and electorlysis.

This method of laying cables is used in open areas where excavation can be done conveniently and at low cost.

2.Draw-in system: In this method, conduit or duct of glazed stone or cast iron or concrete are laid in the ground with manholes at suitable positions along the cable route. The cables are then pulled into position from manholes. Fig. 11.11 shows section through four-way underground duct line. Three of the ducts carry transmission cables and the fourth duct carries relay protection connection, pilot wires. Care must be taken that where the duct line changes direction ; depths, dips and offsets be made with a very long radius or it will be difficult to pull a large cable between the manholes. The distance between the manholes should not be too long so as to simplify the pulling in of the cables. The cables to be laid in this way need not be armoured but must be provided with serving of hessian and jute in order to protect them when being pulled into the ducts. 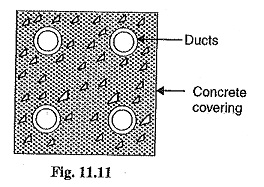 This method of cable laying is suitable for congested areas where excavation is expensive and inconvenient, for once the conduits have been laid, repairs or alterations can be made without opening the ground. This method is generally used for short length cable routes such as in workshops, road crossings where frequent digging is costlier or impossible.

In view of these disadvantages, this method of Laying of Underground Cables is rarely used now-a­days. 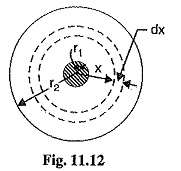 Consider a single-core cable of conductor radius r1 and internal sheath radius r2 as shown in Fig. 11.12. Let I be the length of the cable and p be the resistivity of the insulation.

Consider a very small layer of insulation of thickness dx at a radius x. The length through which leakage current tends to flow is dx and the area of X-section offered to this flow is 2π x l.

Insulation resistance of the whole cable is