Attenuators are designed to change the magnitude of the input signal seen at the input stage, while presenting a constant impedance on all ranges at the attenuator input.

A compensated RC attenuator is required to attenuate all frequencies equally. Without this compensation, HF signal measurements would always have to take the input circuit RC time constant into account.

The input attenuator must provide the correct 1-2-5 sequence while maintaining a constant input impedance, as well as maintain both the input impedance and attenuation over the frequency range for which the oscilloscope is designed. 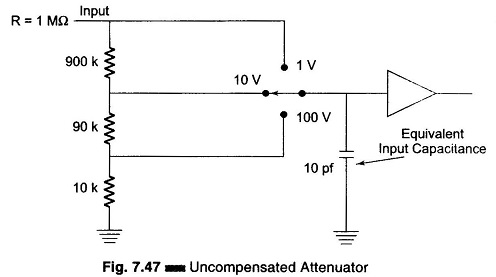 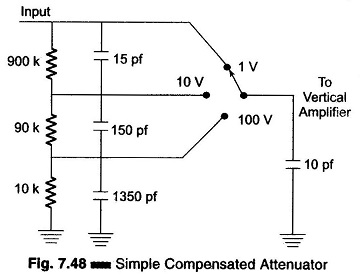 Practically all oscilloscopes provide a switchable input coupling capacitor, as shown in Fig. 7.49. 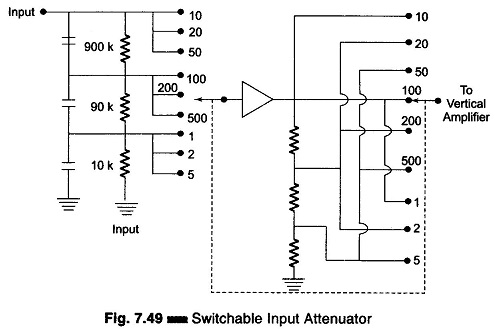 Within the probe tip is a 9 MΩ resistor and shunted across this resistor is a capacitor. This capacitor is adjusted so that the ratio of the shunt capacitance to the series capacitance is exactly 10 to 1.

The input capacitance is not constant from one oscilloscope to another hence the probe is provided with an adjustable compensating capacitor. If the ratio of the series to shunt is not adjusted precisely to 10 to 1, the frequency response of the oscilloscope will be flat.