What is RAM? -Unlike ROM, we can read from or write into the RAM, so it is often called read/write memory. The numerical and character data that are to be processed by the computer change frequently. These data must be stored in type of memory from which they can be read by the microprocessor, modified through processing, and written back for storage. For this reason, they are stored in RAM instead of ROM. But it is a volatile memory, i.e. it cannot hold data when power is turned off.

There are two Types of RAM:

Fig. 3.73 shows a simplified schematic of a bipolar memory cell. The memory cell is implemented using TTL (Transistor- Transistor-Logic) multiple emitter technology. It stores 1 bit of information. It is nothing but a flip-flop. It can store either 0 or 1 as long as power is applied, and it can set or reset to store either 1 or 0, respectively. 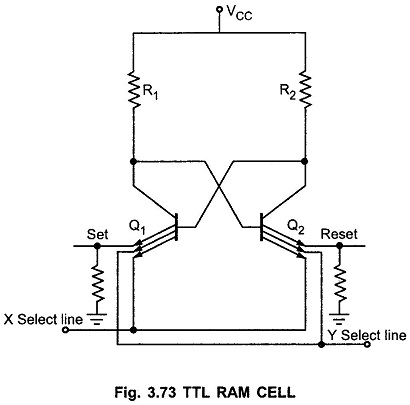 A 1 can be rewritten by pulsing the Q2 (reset) emitter high. Large number of these memory cells are organized on a row and column basis to form a memory chip. Fig. 3.74 shows the row and column organization of a 8192 bit memory chip. 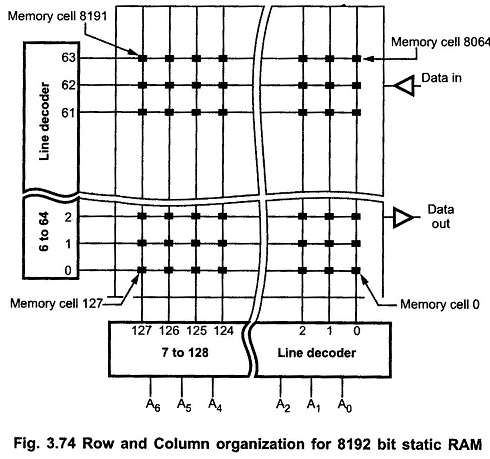 The chip has 13 address lines. The first seven address lines are connected to the column decoder to indicate one of the 128 columns. The remaining 6 address lines are connected to the row decoder to indicate one of 64 rows. Where the decoded row and column cross, they select the desired individual memory cell. Simple arithmetic shows that there are 64 x128=8192, crossings. Therefore, this memory has 8192 memory cells. 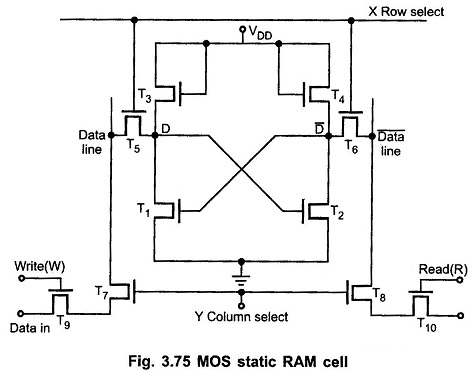 Here, T1 and T2 form the basic cross coupled inverters and T3 and T4 act as load resistors for T1 and T2. X and Y lines are used for addressing the cell. When X and Y both are high cell is selected. When X = 1, T5 and T6 get ON and the cell is connected to the data and data line. When Y = 1, T7 and T8 are made ON. Due to this, either read or write operation is possible.

Write operation can be enabled by making W signal high. With write operation enabled, if data- in signal is logic 1, node D is also at logic 1. This turns ON T2 and T1 is cutoff. If new data on data-in pin is logic 0, T2 will be cutoff and T1 will be turned ON.

Read operation can be enabled by making R signal high. With read operation enabled, T10 becomes ON. This connects the data output (Data) line to the data out and thus the complement of the bit stored in the cell is available at the output. Fig. 3.76 shows the organization MOS static RAM IC Intel 2167. It is 16 K x 1 RAM. 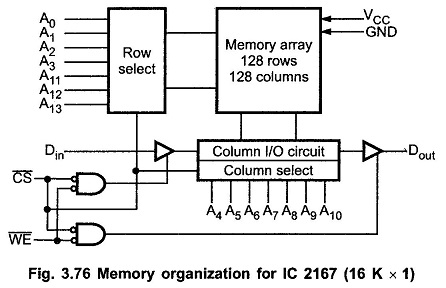 To enable Read and Write operation CS must be low. If CS and WE both are low, it is a write operation. In write operation, data on the Din input is written into the addressed cell while the output will remain in the high impedance state.

When CS is high, both input and output buffers are disabled and the chip is effectively electrically disconnected. This makes the IC to operate in power down mode. In power down mode it takes only 40 mA current as compared to 125 mA in the active mode. 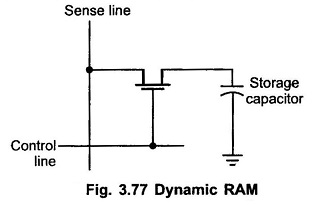 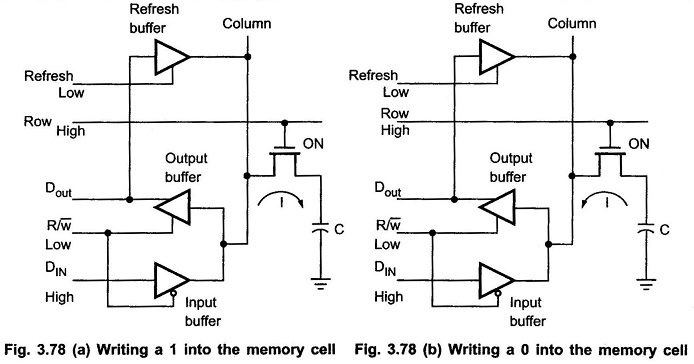 To enable write operation R/W line is made LOW which enables input buffer and disables output buffers, as shown in the Fig. 3.78 (a). To write a 1 into the cell, the DIN line is HIGH, and the transistor is turned ON by a HIGH on the ROW line. This allows the capacitor to charge to a positive voltage. When 0 is to be stored, a LOW is applied to the DIN line. The capacitor remains uncharged, or if it is storing a 1, it discharges as indicated in Fig. 3.78 (b). When the ROW line is made LOW, the transistor turns off and disconnects the capacitor from the data line, thus storing the charge (either 1 or 0) on the capacitor. 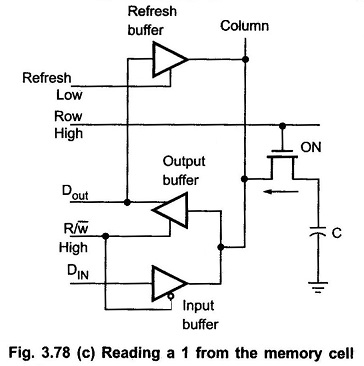 To enable refresh operation R/W line, ROW line and REFRESH line are made HIGH. This turns ON transistor and connects capacitor to COLUMN line. As R/W is HIGH, output buffer is enabled and the stored data bit is applied to the input of refresh buffer. The enabled refresh buffer then produces a voltage on COLUMN line corresponding to the stored bit and thus replenishing the capacitor as shown in Fig. 3.78 (d). 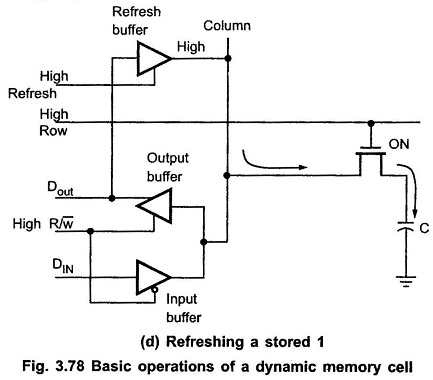 RAM Memory Structure and Its Requirements: 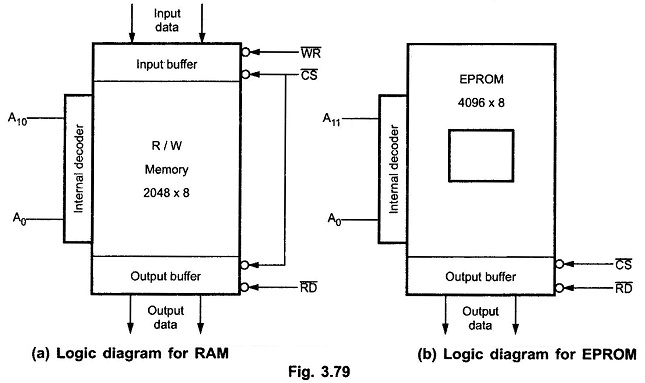 As mentioned earlier, read/write memories consist of an array of registers, in which each register has unique address. The size of the memory is N x M as shown in Fig. 3.79 (a) where N is the number of registers and M is the word length, in number of bits.