2.1 A square loop of side 2d is placed with two of its sides parallel to an infinitely long conductor carrying current I. The centre line of the square is at distance b from the conductor. Determine the expression for the total flux passing through the loop. What would be the loop flux if the loop is placed such that the conduc­tor is normal to the plane of the loop. Does the loop flux in this case depend upon the relative location of the loop with respect to the conductor?

2.2 For the magnetic circuit of Fig. P.2.2, find the flux density and flux in each of the outer limbs and the central limbs. Assume the relative permeability of iron of the core to be (a) ∞, (b) 4500.

2.3 For the Magnetic Circuit Problems shown in Fig. P2.3, calculate the exciting current required to establish a flux of 2 mWb in the air-gap. Take fringing into account empirically. Use the B-H curve of Fig. 2.15. 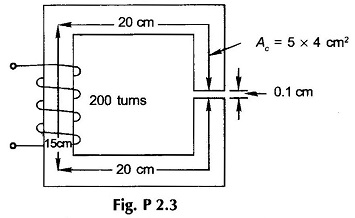 2.4 A steel ring has a mean diameter of 20 cm, a cross-section of 25 cm2 and a radial air-gap of 0.8 mm cut across it. When excited by a current of I A through a coil of 1000 turns wound on the ring core, it produces an air-gap flux of 1 mWb. Neglecting leakage and fringing, calculate (a) relative permeability of steel, and (b) total reluctance of the magnetic circuit. 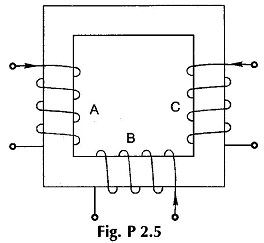 2.6 In the Magnetic Circuit Problems shown in Fig. P2.6, the coil F1 is supplying 4000 AT in the direction indicated. Find the AT of coil F2 and current direction to produce air-gap flux of 4 mWb from top to bottom. The relative permeability of iron may be taken as 2500. 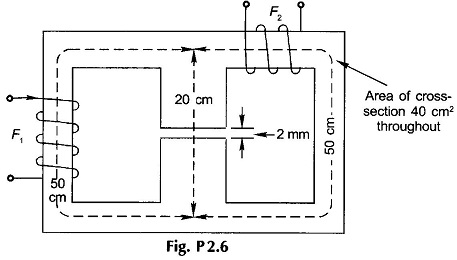 2.7 For the magnetic circuit shown in Fig. P.2.7, the air-gap flux is 0.24 mWb and the number of turns of the coil wound on the central limb is 1000.Calculate (a) the flux in the central limb, (b) the current required. The magnetization curve of the core is as follows: 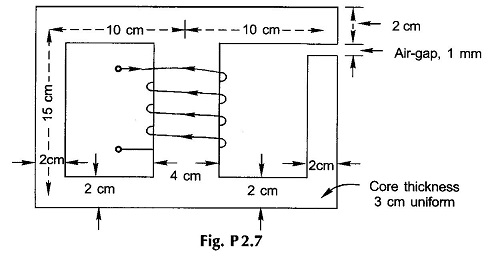 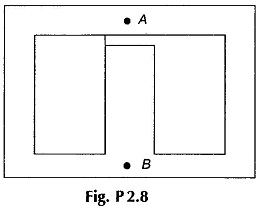 2.9 A cast steel ring has an external diameter of 32 cm and a square cross-section of 4 cm side. Inside and across the ring a cast steel bar 24 x 4 x 2 cm is fitted, the butt-joints being equivalent to a total air-gap of 1 mm. Calculate the ampere-turns required on half of the ring to produce a flux density of 1 T in the other half. Given:

2.10 In Prob. 2.2 the B-H curve of the core material is characterized by the data given below. Find now the flux and flux densities in the three limbs of the core.

2.14 The Magnetic Circuit Problems of Fig. P2.14 has a magnetic core of relative permeability 1600 and is wound with a coil of 1500 turns excited with sinusoidal ac voltage, as shown. Calculate the maximum flux density of the core and the peak value of the exciting current. What is the peak value of the energy stored in the magnetic system and what percentage of it resides in the air -gap?

2.15 The material of the core of Fig. P2.15, wound with two coils as shown, is sheet steel (B-H curve of Fig. 2.15). Coil 2 carries a current 2 A in the direction shown. What current (with direction) should coil 1 carry to establish a flux density of 1.4 T in the core in the indicated direction? 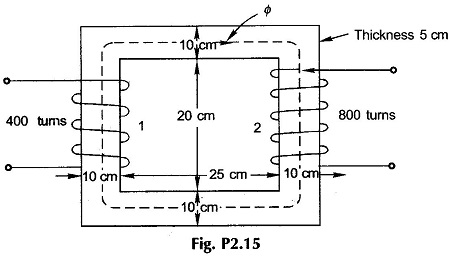 which gives a straight line from which k′e and k′h can be determined.

2.18 A permanent magnet (PM) made of neodymium-iron boron alloy is placed in the magnetic circuit of Fig. P 2.18. Given 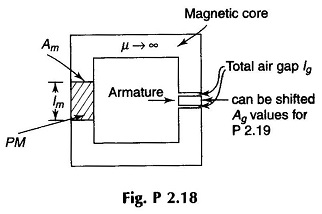 It is desired to have air gap flux density Bg = 0.5 T. For optimum design (mini­mum volume of PM) determine lm.

2.20 The armature in the PM circuit is now taken out and its height reduced so that when it is placed back in the circuit the air gap length lg is now 0.5 cm. Determine Bg and Bm.