A gas in its normal state is almost a perfect insulator. However, when a high voltage is applied between the two electrodes immersed in a gaseous medium, the gas becomes a conductor and an electrical breakdown occurs.The processes that are primarily responsible for the breakdown of a gas are ionization by collision, photo-ionization, and the secondary ionization processes. In insulating gases (also called electron-attaching gases) the process of attachment also plays an important role.

The process of liberating an electron from a gas molecule with the simultaneous production of a positive ion is called ionization. In the process of ionization by collision, a free electron collides with a neutral gas molecule and gives rise to a new electron and a positive ion. If we consider a low pressure gas column in which an electric field E is applied across two plane parallel electrodes, as shown in Fig. 2.1 then, any electron starting at the cathode will be accelerated more and more between collisions with other gas molecules during its travel towards the anode. If the energy (ε) gained during this travel between collisions exceeds the ionization potential, Vi, which is the energy required to dislodge an electron from its atomic shell, then Ionization Processes takes place. This process can be represented as

where, A is the atom, A+ is the positive ion and e– is the electron. 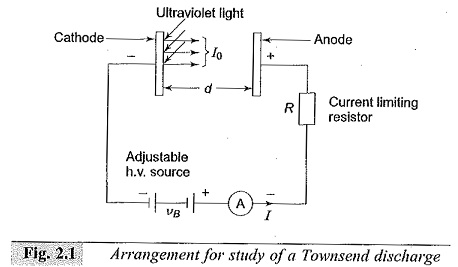 The phenomena associated with Ionization Processes by radiation, or photoionization, involves the interaction of radiation with matter. Photoionization occurs when the amount of radiation energy absorbed by an atom or molecule exceeds its ionization potential.

There are several processes by which radiation can be absorbed by atoms or molecules. They are

Just as an excited atom emits radiation when the electron returns to the lower state or to the ground state, the reverse process takes place when an atom absorbs radiation. This reversible process can be expressed as

where, h is the Planck’s constant, c is the velocity of light, λ is the wavelength of the incident radiation and Vi is the ionization energy of the atom. Substituting for h and c, we get

Secondary ionization processes by which secondary electrons are produced are the one which sustain a discharge after it is established due to ionization by collision and photo-ionization.

They are briefly described below.

(a) Electron Emission due to Positive Ion Impact

Positive ions are formed due to ionization by collision or by photo-ionization, and being positively charged, they travel towards the cathode.

A positive ion approaching a metallic cathode can cause emission of electrons from the cathode by giving up its kinetic energy on impact. If the total energy of the positive ion, namely, the sum of its kinetic energy and the ionization energy, is greater than twice the work function of the metal, then one electron will be ejected and a second electron will neutralise the ion. The probability of this process is measured as γi which is called the Townsend’s secondary ionization coefficient due to positive ions and is defined as the net yield of electrons per incident positive ion. γi increases with ion velocity and depends on the kind of gas and electrode material used.

(b) Electron Emission due to Photons

To cause an electron to escape from a metal, it should be given enough energy to overcome the surface potential barrier. The energy can also be supplied in the form of a photon of ultraviolet light of suitable frequency. Electron emission from a metal surface occurs at the critical condition (see Eq. 2.11)

where φ is the work function of the metallic electrode. The frequency (V) is given by the relationship

(c) Electron Emission due to Metastable and Neutral Atoms

A metastable atom or molecule is an excited particle whose lifetime is very large (10-3 s) compared to the lifetime of an ordinary particle (10-8 s). Electrons can be ejected from the metal surface by the impact of excited (metastable) atoms, provided that their total energy is sufficient to overcome the work function. This process is most easily observed with metastable atoms, because the lifetime of other excited states is too short for them to reach the cathode and cause electron emission, unless they originate very near to the cathode surface. Therefore, the yields can also be large nearly 100%, for the interactions of excited He atom with a clean surface of molybdenum, nickel or magnesium. Neutral atoms in the ground state also give rise to secondary electron emission if their kinetic energy is high (≈ 1000 eV). At low energies the yield is considerably less.

The types of collisions in which electrons may become attached to atoms or molecules to form negative ions are called attachment collisions. Electron attachment process depends on the energy of the electron and the nature of the gas and is a very important process from the engineering point of view. All electrically insulating gases, such as O2, CO2, Cl2, F2, C2F6, C3F8, C4F10, CCI2F2, and SF6 exhibit this property. An electron attachment process can be represented as:

The energy liberated as a result of this process is the kinetic energy K plus the electron affinity Ea. In the attaching or insulating gases, the atoms or molecules have vacancies in their outermost shells and, therefore, have an affinity for electrons. The attachment process plays a very important role in the removal of free electrons from an ionized gas when arc interruption occurs in gas-insulated switchgear.