In Modern Power System Planning, electric energy is an essential ingredient for the industrial and all-round development of any country. It is a coveted form of energy, because it can be generated centrally in bulk and transmitted economically over long distances. Further, it can be adapted easily and efficiently to domestic and industrial applications, particularly for lighting purposes and mechanical work, e.g. drives. The per capita consumption of electrical energy is a reliable indicator of a country’s state of development figures for 2001 are 425 kWh for India and 5600 kWh for UK and 13000 kWh for USA.

Conventionally, electric energy is obtained by conversion from fossil fuels (coal, oil, natural gas), and nuclear and hydro sources. Heat energy released by burning fossil fuels or by fission of nuclear material is converted to electricity by first converting heat energy to the mechanical form through a thermocycle and then converting mechanical energy through generators to the electrical form. Thermocycle is basically a low efficiency process highest efficiencies for modern large size plants range up to 40%, while smaller plants may have considerably lower efficiencies. The earth has fixed non-replenishable re-sources of fossil fuels and nuclear materials, with certain countries over-endowed by nature and others deficient. Hydro energy, though replenishable, is also limited in terms of power. The world’s increasing power requirements can only be partially met by hydro sources. Furthermore, ecological and biological factors place a stringent limit on the use of hydro sources for power production. (The USA has already developed around 50% of its hydro potential and hardly any further expansion is planned because of ecological considerations.)

With the ever increasing per capita energy consumption and exponentially rising population, technologists already see the end of the earth’s non-replenishable fuel resources. The oil crisis of the 1970s has dramatically drawn attention to this fact. In fact, we can no longer afford to use oil as a fuel for generation of electricity. In terms of bulk electric energy generation, a distinct shift is taking place across the world in favour of coal and in particular nuclear sources for generation of electricity. Also, the problems of air and thermal pollution caused by power generation have to be efficiently tackled to avoid ecological disasters. A coordinated worldwide action plan is, therefore, necessary to ensure that energy supply to humanity at large is assured for a long time and at low economic cost. Some of the factors to be considered and actions to be taken are:

In Modern Power System Planning, energy consumption of most developed countries has already reached a level, which this planet cannot afford. There is, in fact, a need to find ways and means of reducing this level. The developing countries, on the other hand, have to intensify their efforts to raise their level of energy production to provide basic amenities to their teeming millions. Of course, in doing so they need to constantly draw upon the experiences of the developed countries and guard against obsolete technology.

Distant hopes are pitched on fusion energy but the scientific and technological advances have a long way to go in this regard. Fusion when harnessed could provide an inexhaustible source of energy. A break-through in the conversion from solar to electric energy could provide another answer to the world’s steeply rising energy needs.

Fast breeder reactor technology is expected to provide the answer for extending nuclear energy resources to last much longer.

Development and application of antipollution technologies:

In this regard, the developing countries already have the example of the developed countries whereby they can avoid going through the phases of intense pollution in their programmes of energy development. Bulk power generating stations are more easily amenable to control of pollution since centralized one-point measures can be adopted.

In Modern Power System Planning, Electric energy today constitutes about 30% of the total annual energy consumption on a worldwide basis. This figure is expected to rise as oil supply for industrial uses becomes more stringent. Transportation can be expected to go electric in a big way in the long run, when non-conventional energy resources are well developed or a breakthrough in fusion is achieved.

To understand some of the problems that the power industry faces let us briefly review some of the characteristic features of generation and transmission. Electricity, unlike water and gas, cannot be stored economically (except in very small quantities in batteries), and the electric utility can exercise little control over the load (power demand) at any time. The Power System Planning must, therefore, be capable of matching the output from generators to the demand at any time at a specified voltage and frequency. The difficulty encountered in this task can be imagined from the fact that load variations over a day comprises three components a steady component known as base load; a varying component whose daily pattern depends upon the time of day; weather, season, a popular festival, etc.; and a purely randomly varying component of relatively small amplitude. Figure 1.1 shows a typical daily load curve. The characteristics of a daily load curve on a gross basis are indicated by peak load and the time of its occurrence and load factor defined as 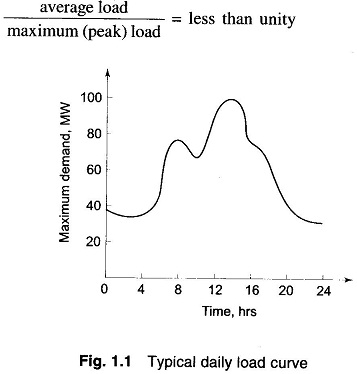 The average load determines the energy consumption over the day, while the peak load along with considerations of standby capacity determines plant capacity for meeting the load.

A high load factor helps in drawing more energy from a given installation. As individual load centers have their own characteristics, their peaks in general have a time diversity, which when utilized through transmission interconnection; greatly aids in jacking up load factors at an individual plant excess power of a plant during light load periods is evacuated through long distance high voltage transmission lines, while a heavily loaded plant receives power.