ZBUS Formulation is given by

The sparsity of YBUS may be retained by using an efficient inversion technique and nodal impedance matrix can then be calculated directly from the factorized admittance matrix.

Equation (9.33) can be written in the expanded form

As per Eq. (9.35) if a unit current is injected at bus (node) j, while the other buses are kept open circuited, the bus voltages yield the values of the jth column of ZBUS. However, no organized computerizable techniques are possible for finding the bus voltages. The technique had utility in AC Network Analyzers where the bus voltages could be read by a voltmeter.

It is a step-by-step programmable technique which proceeds branch by branch. It has the advantage that any modification of the network does not require complete rebuilding of ZBUS Formulation.

Consider that ZBUS Formulation has been formulated up to a certain stage and another branch is now added. Then

Upon adding a new branch, one of the following situations is presented. 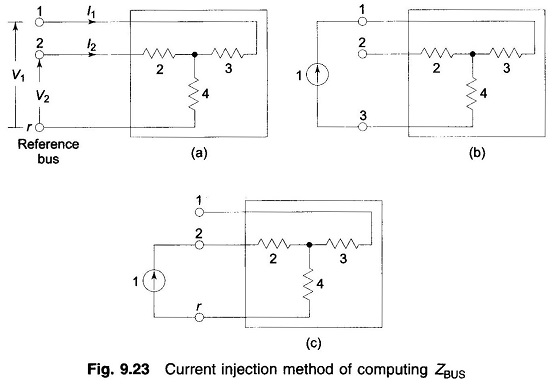 Figure 9.24 shows a passive (linear) n-bus network in which branch with impedance Zb is added to the new bus k and the reference bus r. Now 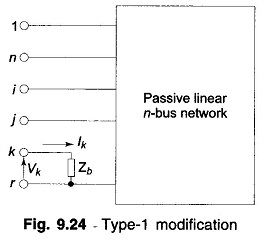 Zb is added from new bus k to the old bus j as in Fig. 9.25. It follows from this figure that 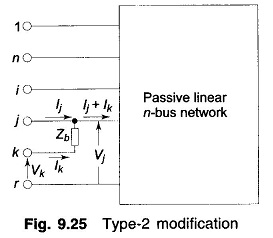 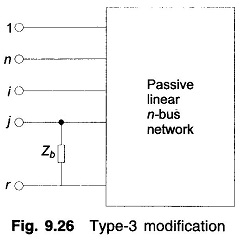 Eliminate Ik in the set of equations contained in the matrix operation (9.38),

Equation (9.37) can be written in matrix form as

Zb connects two old buses as in Fig. 9.27. Equations can be written as follows for all the network buses. 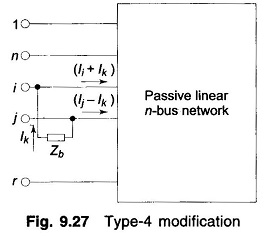 The voltages of the buses i and j are, however, constrained by the equation (Fig. 9.27)

Eliminating Ik in Eq. (9.46) on lines similar to what was done in Type-2 modification, it follows that

When the network undergoes changes, the modification procedures can be employed to revise the bus impedance matrix of the network. The opening of a line (Zij) is equivalent to adding a branch in parallel to it with impedance — Zij.