The turbocompressors and blowers in the industry require drives rated up to 40 MW. Drives of large rating are also required

When used with turbocompressors the frequency converter may be used for performing one or more of the following:

Dc link converter fed synchronous motor can be used for the above ap­plications. A dc link converter performs the function of a variable frequency converter. Two converters one on the line side and the other on the motor side are connected by a dc link inductance which keeps the current constant and acts as a decoupling agent between the converters. The converter on the mains is a line commutated phase controlled converter. The machine side converter is simple in its stricture, as it makes use of machine voltages for its commutation. Thus the forced commutation circuit is dispensed with. The converter facilitates power flow in the reverse direction also, i.e., from machine to line. In this case the functions of the converters interchange.

The features of this drive are:

Large synchronous motors are required to drive the compressors. Problems arise with synchronous motors as their power ratings increase, especially when the motor rating is greater than the short circuit rating of the power system. These are more significant when synchronous starting is employed. These problems and disadvantages of a synchronous (line) starting can be eliminated using a static frequency changer. When the load torque is high, a very high starting torque is required. This high value of starting torque is achieved with a very high value of starting current, e.g, five times full load current may be required. In synchronous starting using static frequency converter (s.f.c.), the required starting torque can be obtained at relatively low value of cur­rent (1.5 times full load value). The acceleration starts from zero speed and the stator frequency is gradually increased so that rotor is always in synchro­nism with the stator field. The voltage dips on the mains are automatically eliminated.

In asynchronous starting the energy stored in the rotating parts (1/2JW2) calls for increased thermal rating of the rotor due to difference in the speeds of rotor and stator field. When this type of starting is used for synchronous motors driving Turbocompressors or blowers, very high rotational energy is stored and hence the rotor of the motor is heavily thermally loaded. But the rotors of salient pole motors have limited thermal capacity. Starting by means of s.f.c. is suitable here. 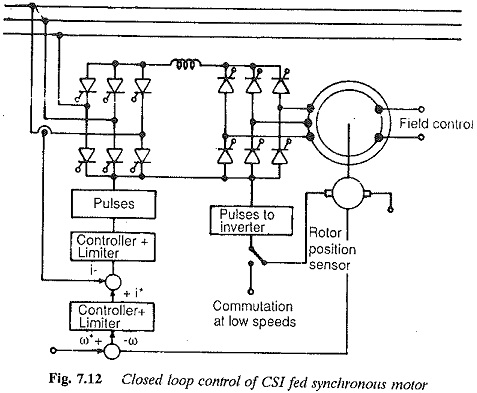 If the load torque of the compressor can be by disconnected by some means during starting the converter becomes very compact.

A static frequency converter can be used to provide a frequency which gives operating speeds of 6000 rpm at power ranges of 10 MW. The motors are available for this speed. Direct driving without gears is possible. The s.f.c. used performs both starting and running at high speed.

To summarize: An s.f.c. eliminates starting problem, makes a motor run at a speed higher than base speed, avoids power transmission equipment such as gears, and permits speed control over a wide range. An s.f.c. provides favourable start-up and acceleration so that the disturbances on the power system are least. The s.f.c. also prevents a synchronous motor from delivering fault or surge current when short circuit occurs on the mains. This saves switchgear.

The Turbocompressors system has a high degree of reliability. The availability of thyristors at reduced prices and higher voltages and current ratings makes the s.f.c. very popular. Modular construction is also possible, in which repair and fault find­ing are easy and quick. In the case of applications where the interruption of equipment would cause very grave consequences, the principle of redundancy may be used. Extra equipment such as thyristors may be used which permit the continuity of service in case of failure.

In short, a synchronous motor with static variable frequency converter using thyristors is becoming very popular. The s.f.c. functions as starting equipment as well as unit for speed control. Turbocompressors is used with compressors, blowers and pumps.