If the electric field is uniform, a gradual increase in voltage across a gap produces a breakdown of the gap in the form of a spark without any preliminary discharges. On the other hand, if the field is non-uniform, an increase in voltage will first cause a discharge in the gas to appear at points with highest electric field intensity, namely at sharp points or where the electrodes are curved or on transmission lines. This form of discharge is called a Corona Discharges and can be observed as a bluish luminescence. This phenomenon is always accompanied by a hissing noise, and the air surrounding the corona region becomes converted into ozone. Corona Discharges is responsible for considerable loss of power from high voltage transmission lines, and it leads to the deterioration of insulation due to the combined action of the bombardment of ions and of the chemical compounds formed during discharges. Corona also gives rise to radio interference.

The voltage gradient required to produce visual a.c. corona in air at a conductor surface, called the corona inception field, can be approximately given for the case of parallel wires of radius r as

where m is the surface irregularity factor which becomes equal to unity for highly polished smooth wires; d is the relative air density correction factor given by,

On the high voltage conductors at high pressures there is a distinct difference in the visual appearance of the corona under positive and negative polarities of the applied voltage. When the voltage is positive, corona appears as a uniform bluish white sheath over the entire surface of the conductor. On the other hand, when the voltage is negative, the corona will appear like reddish glowing spots distributed along the length of the wire.

Investigations with point-plane gaps in air showed that when point is negative, corona appears as current pulses called Trichel pulses, and the repetition frequency of these pulses increases as the applied voltage is increased and decreases with decrease in pressure. On the other hand, observations when the point is positive in air showed that the corona current increases steadily with voltage. At sufficiently high voltage, current amplification increases rapidly with voltage, up to a current of about 10-7 A, after which the current becomes pulsed with repetition frequency of about 1 kHz composed of small bursts. This form of corona is called burst corona. The average current then increases steadily with applied voltage leading to breakdown. 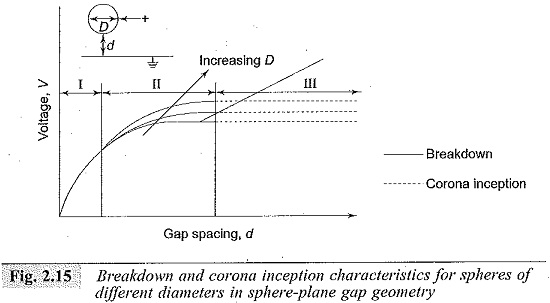 The corona inception and breakdown voltages of the sphere-plane arrangement are shown in Fig. 2.15. From this figure it can be seen that

It may be summarized that the study of corona and non-uniform field breakdown is very complicated and investigations are still under progress.