Liquid dielectrics, because of their inherent properties, appear as though they would be more useful as insulating materials than either solids or gases. This is because both liquids and solids are usually 103 times denser than gases and hence, from Paschen’s flaw it should follow that they possess much higher dielectric strength of the order of 107 V/cm. Also, liquids, like gases, fill the complete volume to be insulated and simultaneously will dissipate heat by convection. Oil is about 10 times more efficient than air or nitrogen in its heat transfer capability when used in transformers. Although liquids are expected to give very high dielectric strength of the order of 10 MV/cm, in actual practice the strengths obtained are only of the order of 100 kV/cm.

Liquid dielectrics are used mainly as impregnants in high voltage cables and capacitors, and for filling up of transformers, circuit breakers etc. Liquid dielectrics also act as heat transfer agents in transformers, and as arc quenching media in circuit brealcers. Petroleum oils (Transformer oil) are the most commonly used liquid dielectrics. Synthetic hydrocarbons and halogenated hydrocarbons are also used for certain applications. Fm very high temperature application, silicone oils and fluorinated hydrocarbons are employed. However, it may be mentioned that some of the isomers of poly-chlorinated cliphenyls (generally called askerels) have been found to be very toxic and poisonous, and hence, their use has been almost stopped.

Liquid dielectrics normally are mixtures of hydrocarbons and are weakly polarised. When used for electrical insulation purposes they should be free from moisture, products of oxidation and other contaminants. The most important factor that affects the electrical strength of an insulating oil is the presence of water in the form of fine droplets suspended in the oil. The presence of even 0.01% water in transformer oil reduces its electrical strength to 20% of the dry oil value. The dielectric strength of oil reduces more sharply, if it contains fibrous impurities in addition to water. Table 3.1 shows the properties of some dielectrics commonly used in electrical equipment. 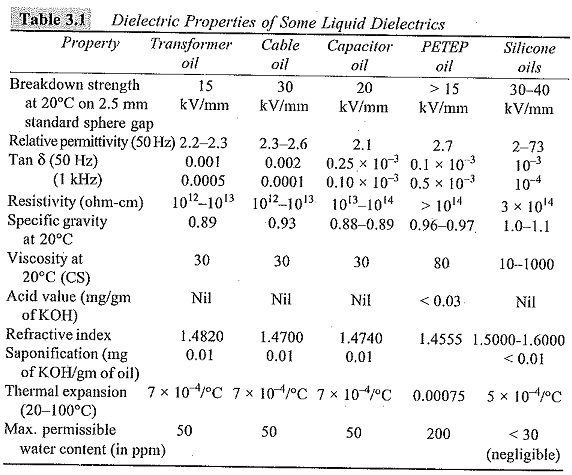 Of the insulating liquids shown in Table 3.1, transformer oils are the cheapest and the most commonly used. The electrical properties of transformer oil are given in the above table, Oils used in the capacitors are similar to transformer oil but they are subjected to a very high degree of purification. Various kinds of oils are used in cables as impregnants for paper insulation and to improve their heat transfer capability. Table 3.1 gives the dielectric properties of various liquid dielectrics used in cables, capacitors and in other special applications.

In practice, the choice of a liquid dielectric for a given application is made mainly on the basis of its chemical stability. Other factors such as saving of space, cost, previous usage, and susceptibility to the environmental influences are also considered.