A distributor arranged to form a closed loop and fed at one or more points is called a ring distributor. Such a distributor starts from one point, makes a loop through the area to be served, and returns to the original point. For the purpose of calculating voltage distribution, the distributor can be considered as consisting of a series of open distributors fed at both ends. The principal advantage of ring distributor is that by proper choice in the number of feeding points, great economy in copper can be affected.

The most simple case of a ring distributor is the one having only one feeding point as shown in Fig. 13.36(ii). Here A is the feeding point and tappings are taken from points B and C. For the purpose of calculations, it is equivalent to a straight distributor fed at both ends with equal voltages. 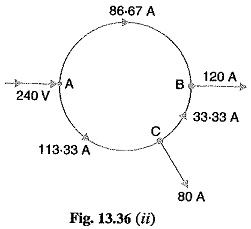 Therefore, current distribution in each section and the voltage of load points can be calculated.