Location of Reactors in Power System:

No definite statement can be given as to which one of the above locations is preferable; each installation has its own particular demands which must be carefully considered before a choice of Location of Reactors in Power System can be made.

When the reactors are connected in series with each generator, they are known as generator reactors (see Fig. 17.4). In this case, the reactor may be considered as a part of leak­age reactance of the generator ; hence its effect is to protect the generator in the case of any short-circuit beyond the reactors. 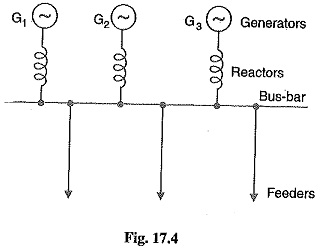 Due to these disadvantages and also since modern power station generators have sufficiently large leakage reactance to protect them against short-circuit, it is not a common practice to use sepa­rate reactors for the generators.

When the reactors are connected in series with each feeder, they are known as feeder reactors (see Fig. 17.5). Since most of the short-circuits occur on feeders, a large number of reactors are used for such circuits. Two principal advantages are claimed for feeder Location of Reactors in Power System. Firstly, if a fault occurs on any feeder, the voltage drop in its reactor will not affect the bus-bars voltage so that there is a little tendency for the generator to lose synchronism. Secondly, the fault on a feeder will not affect other feeders and consequently the effects of fault are localized. 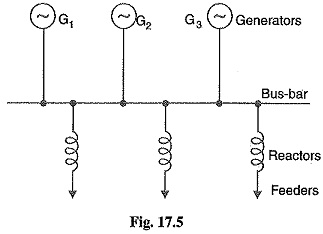 The above two methods of locating reactors suffer from the disadvantage that there is considerable voltage drop and power loss in the Location of Reactors in Power System even during normal operation. This disadvantage can be overcome by locating the reactors in the bus-bars. There are two methods for this purpose, namely ; Ring system and Tie-Bar system.

(i) Ring system: In this system, bus-bar is divided into sections and these sections are connected through reactors as shown in Fig. 17.6. Generally, one feeder is fed from one generator only. Under normal operating conditions, each generator will supply its own section of the load and very little power will be fed by other generators. This results in low power loss and voltage drop in the reactors. However, the principal advantage of the system is that if a fault occurs on any feeder, only one generator (to which the particular feeder is connected) mainly feeds the fault current while the current fed from other generators is small due to the presence of Location of Reactors in Power System. Therefore, only that section of bus-bar is affected to which the feeder is connected, the other sections being able to continue in normal operation. Bus bar 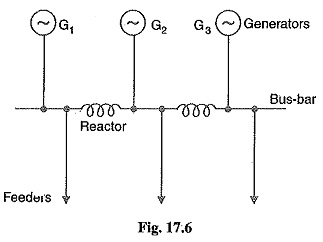 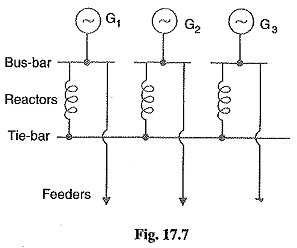 It has already been discussed that 3-phase short-circuit faults result in symmetrical fault currents i.e. fault currents in the three phases are equal in magnitude but displaced 120° electrical from one another. Therefore, problems involving such faults can be solved by considering one phase only as the same conditions prevail in the other two phases. The procedure for the solution of such faults involves the following steps :