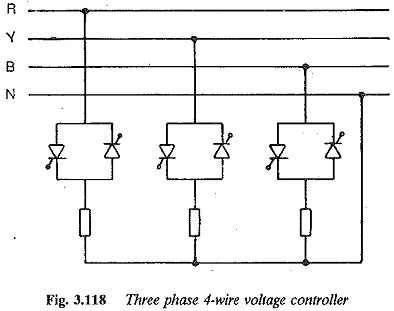 A three phase four wire controller is shown in Fig. 3.118. The load neutral and supply neutral are connected together. Each of the three controllers can be independently controlled to feed the load impedance. Each phase has the same relations as a single phase controller. The analysis is simple and straightforward since the system can be studied as if the loads here are supplied individually by single phase controllers. The neutral and line currents contain triplet harmonics along with other odd harmonics. 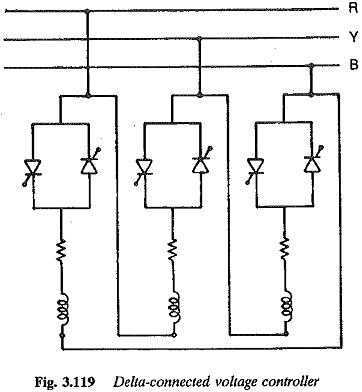 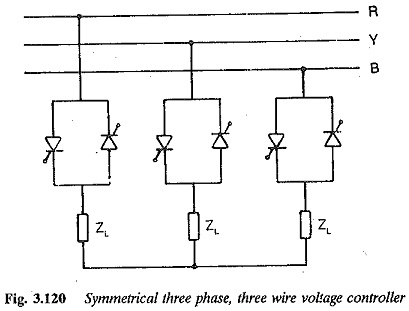 There are certain types of connections which are difficult to analyse. One such circuit is a three phase, three wire star-connected controller, which is normally used when the source neutral cannot be loaded or is absent. The load neutral is isolated. The circuit is depicted in Fig. 3.120. The system is complicated and has to be studied and analysed as a three phase circuit. 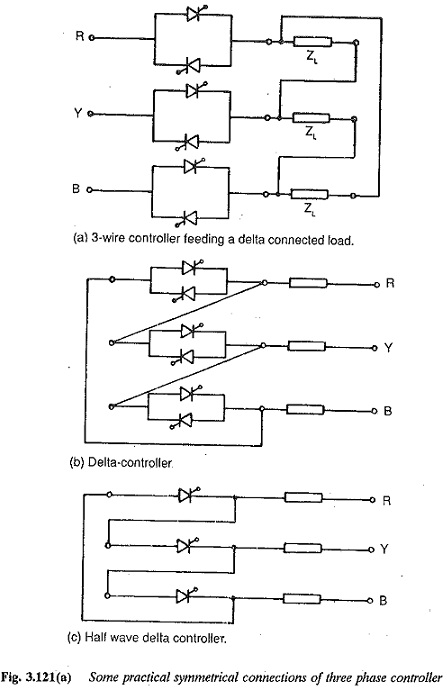 Several other possible connections of Three Phase AC Voltage Controller are depicted in Fig. 3.121. All of them have to be studied as three phase circuits. The operation of a Three Phase AC Voltage Controller is affected by both the load and the type of connections of the single phase controllers used to form the three phase unit. The analysis also differs for each configuration. It is difficult to summarise the features of each circuit. 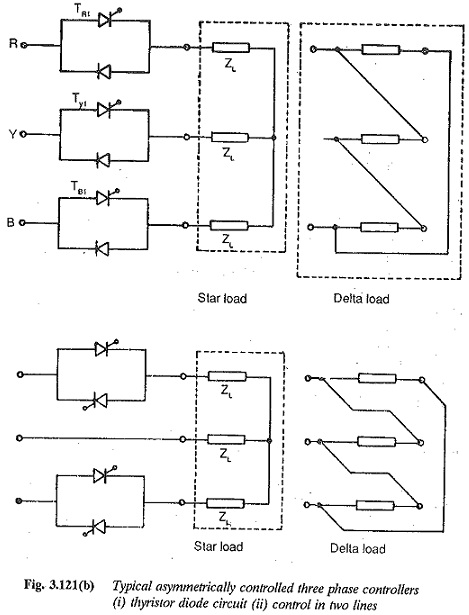 We now discuss the features of a symmetrically controlled three phase, three wire, star-connected controller for both ohmic and inductive loads. The voltage and current waveforms and control characteristics are derived. 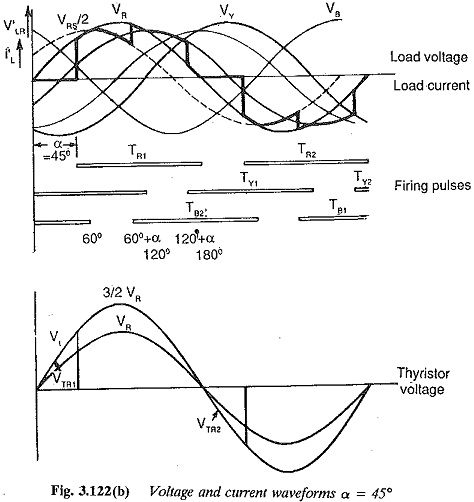 In cases of inductive loads, the current zero occurs after the voltage zero and hence a trigger pulse must be present continuously, so that the thyristor turns on at the desired instant when the forward voltage occurs. However, when long gate pulses or a train of pulses are applied to the thyristor to ensure the conduction whenever the voltage is positive to the leakage currents during reverse bias of the thyristor must be acceptable. Further, the operation may be upset by the voltage sharing of the series-connected thyristors. The angle is reckoned from the zero of the voltage. The conduction period for the thyristor for ohmic load is 180° and the firing pulse occurs for 180°.

The voltage across the load impedance can be determined as follows:

1. When a controller is in the non-conducting state the corresponding phase voltage of the load is zero assuming a star connected load.

4. Only one converter receives firing pulse with no other converter be­ing in the conducting state, no conduction takes place. All the phase voltages are zero.