Crawling and Cogging in Induction Motor:

Crawling and Cogging in Induction Motor – A squirrel-cage rotor may exhibit a peculiar behavior in starting for certain relationships between the number of poles and the stator and rotor slots. With the number of stator slots S1 equal to or an integral multiple of rotor slots S2, the variation of reluctance as a function of space will be quite pronounced resulting in strong alignment forces at the instant of starting. These forces may create an aligning torque stronger than the accelerating torque with consequent failure of the motor to start. This phenomenon is known as cogging. Such combination of stator and rotor slots must, therefore, be avoided in machine design.

Certain combinations of S1 and S2 cause accentuation of certain space harmonics of the mmf wave, e.g. fifth and seventh harmonics which correspond to poles five and seven times that of the fundamental. Since the space-phase difference between fundamental poles of the winding phase is (0°, 120°, 240°), this (space-phase) difference is (0°, 240°, 120°) for the fifth harmonic poles and (0°, 120°, 240°) for the seventh. Hence the fifth harmonic poles rotate backwards with synchronous speed of ns/5 and the seventh harmonic poles rotate forward at ns/7 . These harmonic mmfs produce their own asynchronous (induction) torques of the same general torque-slip shape as that of the fundamental. 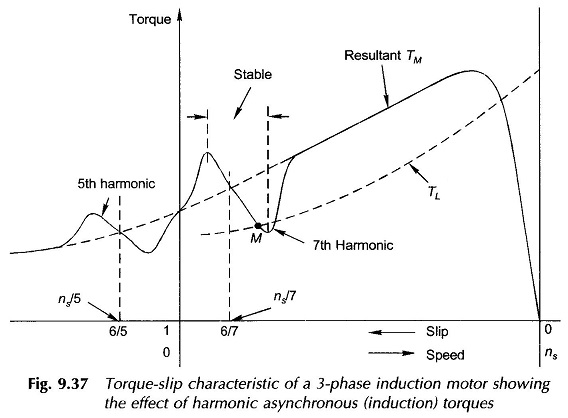 Figure 9.37 shows the superimposition of the fundamental, fifth and seventh harmonic torque-slip curves. A marked saddle effect is observed with stable region of operation (negative torque-slip slope) around 1/7th normal motor speed (s = 6/7). In Fig. 9.36 the load torque curve intersects the motor torque curve at the point M resulting in stable operation. This phenomenon is known as crawling (running stably at low speed).

Thus there is a discontinuity at ns/7 in the torque-slip characteristic produced by not the seventh but the 13th harmonic as shown in Fig. 9.38. 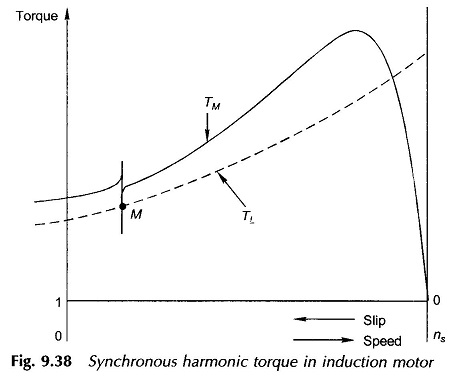 Crawling and Cogging in Induction Motor are much less prominent in slip-ring induction machines as these possess higher starting torques. The induction harmonic torque cannot be avoided, but can be reduced by making a proper choice of coil-span and by skewing (slightly twisting the rotor teeth). The synchronous harmonic torques can be avoided totally by a proper combination of stator and rotor slots.