In many processes, the cycling that occurs with the two position ON—OFF control is undesirable. Steady process controlled in the absence of noises, is possible when the controlled variable is a continuous function of the error. A most widely used form of continuous control mode is the proportional control action, in which a smooth, linear relation exists between the controller output and error. Hence, Proportional Controller can be represented as

The above equation indicates one-to-one correspondence between Ep and P. The control action can also be expressed in terms of the Proportional Bandwidth (PB), defined as the error required to cause a 100% change in controller output and is usually expressed as percentage of the chart width.

The characteristics of a proportional control is as shown in Fig. 21.6 (a). 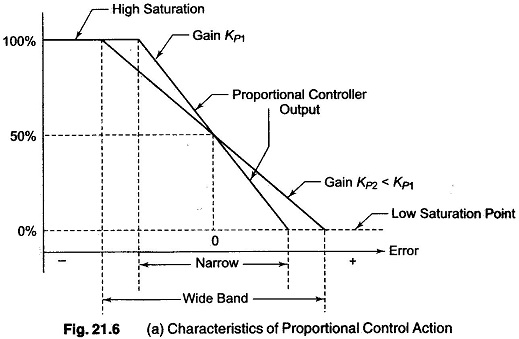