The Characteristics of Mechanical Loading are the two components of an electro-mechanical energy-conversion system, and the machine characteristics, generally, play a predominant part in the operating behavior of the complete system.

The Characteristics of Mechanical Loading can be classified as below: 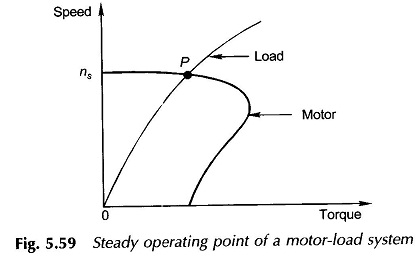 Certain loads, such as cranes, hoists and other traction-type drives, demand high torque at low speeds and low torque at high speed so that the kW demanded from the mains remains substantially constant. This nature is imparted to the load wherever heavy inertias are to be accelerated.

The motor characteristics can be classified as:

The speed remains exactly constant independent of torque as in Fig. 5.60(a). This characteristic is possessed by the synchronous motor.

Here the motor speed drops by a few per cent from no-load to full-load as in Fig. 5.60(b). The ac induction motor (over the operating region) and dc shunt motor both possess this characteristic.

Here the speed rises sharply as the load torque reduces as in Fig. 5.60(c). This type of characteristic is possessed by a de series motor ideally suitable for traction-type loads. 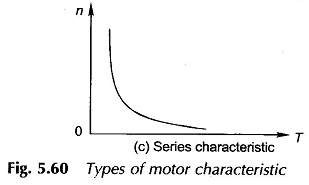 The accelerating (starting) and decelerating (braking) characteristics of motor-load systems are also of equal importance in their industrial applications. The system should be capable of coming to full speed from rest and be able to be stopped in an acceptable time period. These requirements are stringent in starting on-load and in fast braking and reversal in certain special applications (rolling mill drives). A motor has three regions of operation—generating, motoring and braking. In generating region it returns the decelerating intertial energy back to electric main preventing the system from acquiring dangerously high speeds—as in lowering a hoist or down­the-gradient traction. In braking region the machine absorbs mechanical energy (as well as some electric energy) the form of losses in it appearing as heat. A dc motor offers excellent starting and braking characteristics, much superior to those of an ac induction motor.

Similar to the case of motors, the operating point of a generator-load system is determined by the Characteristics of Mechanical Loading of the two as shown in Fig. 5.61 for a dc shunt generator. Similar is the case with ac (synchronous) generators. In modern systems, generators operating in parallel feed loads spread over geographically wide areas through transmission lines. The system must meet the requirement of a substantially constant voltage as load varies over a wide range. A captive generator feeding a single motor is used in certain speed-control schemes in which the terminal voltage may be required to vary in a peculiar fashion. 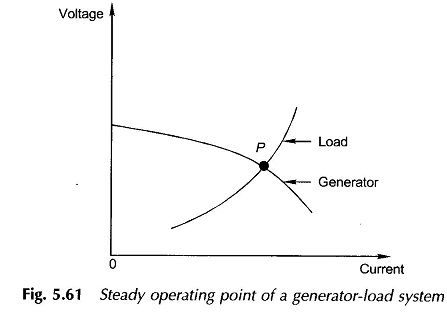